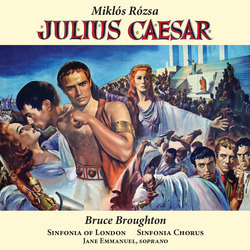 As part of its ongoing digital series of releases, Intrada has now fully remastered its 1995 recording of Miklós Rózsa's Julius Caesar, performed brilliantly by the Sinfonia of London at Air Studios in London. From the thundering "Overture," the regal "Caesar's Procession," the skittering, malevolent "The Scolding Winds," the treacherous "They Murder Caesar" and the lonely horns calling in "Brutus' Camp," Rózsa composed a stunning work that stands as one of his most fitting and complex. It is the story of Caesar's downfall in pure musical terms.

As Rozsa himself affirms his approach: "If Julius Caesar had been merely an historical film about Caesar, I might have attempted the use of period music. However, it was much more than that. It is a Shakespearean tragedy and with its superb language a mirror of the times in which it was written, the age of Elizabeth. And it is the language which dictates its style." The music is dark, brooding and tragic, spotlighted at various intervals with bright bursts of Roman splendor, meticulously crafted in terms of musical structure.

Remastered in 24-bit, the resultant master is richer in detail than the original release. As with previous Excalibur digital releases, this release will be available digitally as well as on CD for a limited time. The CD will be available until October 15th, 2021, as a precursor to the digital album's release.