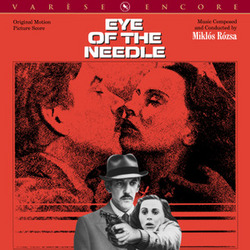 Eye of the Needle

We could think of no better way to begin our Varčse Encore series than by celebrating the music of the great Miklós Rózsa. Dr. Rózsa was one of the very first composers to begin recording for Varčse Sarabande, back in 1981. Rózsa traveled to Nuremberg, Germany to record this album of his score for director Richard Marquand's Eye of the Needle. Marquand's very next film was Return of the Jedi in 1983.

Rózsa was the perfect choice for this spy thriller and delivered a genre classic.

In Eye of the Needle, Donald Sutherland stars as a villainous Nazi spy whose passions betray him via a married woman (Kate Nelligan) in this intriguing blend of romance and espionage against the backdrop of WWII Britain.