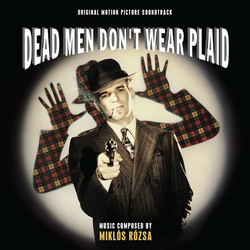 In honor or Miklós Rózsa's 115th birthday and as part of the ongoing Universal Pictures Film Music Classics Collection, Intrada presents Dead Men Don't Wear Plaid. Rózsa was born on April 18th,1907 in Budapest, Hungary. He scored his first film, Knight Without Armour, in 1937 and 45 years later in 1982 he completed his last film score – Dead Men Don't Wear Plaid. It was a fitting film on which to end his distinguished career, as it is set in the '40s and brilliantly incorporates clips from noir classics of that time, including several that Rózsa himself had scored. Although Dead Men is a comedy and not a genre at which Rózsa felt particularly adept, its noir setting allowed him to play it straight, as if he was back scoring pictures in the '40s, but relying on decades of artistic growth that had since transpired. He builds the score on two major themes, both introduced in the "Prelude": an angular, astringent minor-mode tune associated with the darker aspects of the drama followed by a lush, romantic love theme, both of which figure significantly in the score.The recording sessions were led by an esteemed composer and conductor in his own right, Lee Holdridge.

The album was mixed from the 1/2" 3-channel session elements carefully stored in the Universal archives and features 2-CDs worth of Rózsa's score. CD 1 includes the 62-minute score program, with CD 2 covering additional score and alternates.

The film begins when Juliet Forrest (Rachel Ward) hires private dick Rigby Reardon (Steve Martin) to investigate the murder of her father, a noted "cheese scientist." Rigby accepts the job, with the search for the missing Dr. Forrest taking Reardon, disguised as a little old lady, to prison to get information from a manic James Cagney (White Heat), and later to a supermarket where, dressed in Barbara Stanwyck's blond wig, he picks up a lecherous Fred MacMurray (Double Indemnity). Ultimately Reardon has encounters with characters from The Lost Weekend; Sorry, Wrong Number; Double Indemnity and The Bribe (among others), all seamlessly integrated into an elaborate tale that concludes in Peru where the Nazis are using Dr. Forrest to create a corrosive cheese mold that will destroy America.