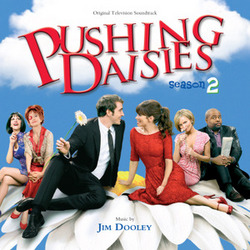 Dig into a delicious second helping of Pushing Daisies, the multiple Emmy® Award-winning series. In the second and final season, Ned (Lee Pace) and his alive-again love Chuck (Anna Friel) have more on the menu when family skeletons—both literal and figurative—loom over the Pie Hole and its patrons. As jockey-cum-waitress Olive Snook (Emmy® award winner Kristin Chenoweth) joins a nunnery to mend her broken heart, the Pie Maker who broke it hides Chuck from her Aunt Vivian (Ellen Greene) and mother Lily (Swoozie Kurtz), who believe she's dead. Naturally, this results in resurrecting Chuck's father, who actually was dead. Private Investigator Emerson Cod (Chi McBride) has daddy issues of his own when his baby-stealing baby-mama finds herself at the center of a murder case. Narrating the proceedings is Jim Dale, who has won countless fans and two Grammy awards for the audiobooks of the Harry Potter series.

The show's devoted fans have long been clamoring for this second season soundtrack, and we're happy at last to make Jim Dooley's charming and whimsical score available on CD.