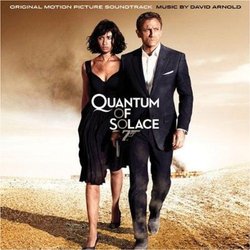 When Casino Royale came out in 2006, reviewers were quick to point out that the movie reinvented James Bond to the point of virtually removing his theme song. The lack of that one motive caused some consternation, but by and large David Arnold\'s score was held up with high praise.

Arnold has returned for the follow up to Casino Royale with Quantum of Solace and, like the film itself, has made a seamless continuation of the earlier work. It is hard to review this new score without references to the old as Arnold has retained themes and sounds from Casino Royale and much of the score\'s emotional resonance relies on those connections. Take for instance the beautiful cue \"What\'s Keeping You Awake.\" On a late-night flight over the Atlantic, Bond ruminates on his lost love Vesper. Even without flashbacks, two things tell an audience the answer to the cue\'s question: he is holding the necklace Vesper wore in Casino Royale and underneath the scene Vesper\'s theme slowly floats by on piano. The scene\'s impact is deepened by knowledge of the earlier movie\'s music, and Arnold exploits those connections throughout the film. The level of detail brought to the score makes Quantum of Solace the richer of the two scores, though as a stand-alone experience it does not reveal all its secrets. Part of the score\'s depth must come from Arnold\'s relationship with the director. He later reported that director Marc Forster worked closely with him and even gave him ample time to compose, a move that certainly paid off.

As with Casino Royale, Quantum of Solace has sublimated the layers of electronics from the last Brosnan Bond pictures and put over them layers of acoustic instruments giving exotic color to the various locales to which Bond travels. These added instruments provide some of the most striking cues on first listen, especially the short and punchy \"Bolivian Taxi Ride\" which flirts with the James Bond Theme just enough for recognition. They also add to character depth, as in the beautiful cues framing the manner in which we see the main Bond girl Camille. We first meet her in relationship to the film\'s villain, Greene, in \"Camille and Green,\" where her music has an air of uncertainty both in harmonic and instrumental color, especially through the use of pan pipes while Greene is given the \"Quantum\" theme in the low brass. When we find out her motivations in \"Camille\'s Story,\" the pan pipes are replaced by the more subtle wooden flute and harp, creating a more inviting character as we are led to identify with her on screen.

Perhaps most interesting to my ears was the way in which Arnold developed the psychological character of Bond throughout these two films. I find that his deliberate avoidance of the Bond theme, a fact so noticeable and remarked upon that it had to be an intentional choice, highlights this feature most fully. Throughout both Casino Royale and Quantum of Solace, the Bond theme peeks around sonic corners, playfully showing a bit of itself to the audience without ever being fully revealed. In Quantum the theme does not appear fully until the very end. Over the course of these two films, Bond has been becoming Bond, learning his craft and discovering how he will operate. Finally, in the snows of Russia, a visual link back to the opening of Casino Royale where he completes his final kill, Bond releases his vengeance and becomes the 007 spy we all know. At that point, his theme rises out of the piano (which primarily has carried Vesper\'s theme throughout the film) into the full-bore brassy statement we\'ve craved for two pictures. Once Bond becomes Bond, he takes up his theme. Arnold\'s musical depiction is a brilliant use of music to flesh out character.

It is impossible to talk about a Bond picture without discussing the title song and much invective has been directed toward Jack White\'s \"Another Way to Die,\" performed with Alicia Keys on piano and vocals. Most of the criticism references the lack of brass and a singable melody, directly comparing \"Another Way to Die\" to the legacy of 20 other Bond songs. I find this criticism hollow. There is a long tradition of songs, but for a film billing itself as part of a franchise reboot, breaking that tradition (along with many others) seems reasonable. The criticism that does ring true is the lack of thematic integration of the song with the rest of the score. Arnold usually co-writes the songs and then uses the themes in his score, making a strong connection between the two. Here, White wrote in his signature sound blending blues and early rock into a new hybrid. Taken in the context of White\'s work, \"Another Way to Die\" is a fairly strong song, fully of strange harmonic twists and wordplay. I just wish it had more connection with the movie\'s sound.

Overall, I found Arnold to be continuing his high level of writing from Casino Royale to this new picture. As with any action film there is plenty of underscoring that serves only to create a little tension, but those filler moments are overshadowed by the musical characterization Arnold accomplishes. Quantum of Solace is a strong entry in the canon of Bond scores.