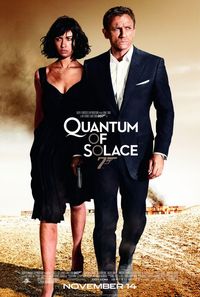 2006 brought us a reboot of the James Bond franchise. Surpassing most expectations, Casino Royale was a surprise at how exciting it made a game of poker, but also helped to bring Bond back to basics, and through Daniel Craig, show us how Bond became the Bond that we all know.  The next Bond film, Quantum of Solace, would be the first Bond film to pick up where the previous one had left off.  At the end of Casino Royale, Bond discovered that his (now deceased) lover Vesper Lynd (Eva Green) had betrayed him and used the winnings from the tournament to save her kidnapped boyfriend who was being held hostage by a mysterious terrorist organization.  The film ended with Bond seeking out Mr. White (Jesper Christensen), the man who last had the money, and shooting him in the leg.

Quantum of Solace continues the storyline, with Bond taking Mr. White into custody for interrogation. From there, we learn that the (never-identified) terrorist organization is much bigger than anyone knew, and they have people everywhere.  M (Judi Dench) is shocked at the size of the organization (which we learn is called \"Quantum\").  As Bond struggles to come to terms with Vesper\'s death, he also tries to solve the mystery of why she betrayed him and MI6.  His leads point to Dominic Greene (Mathieu Amalric), the philanthropic head of an environmental company that has a devious plan to destabilize Bolivia through a coup d\'etat. Bond\'s journey takes him to Haiti, Austria, Italy and Bolivia, leaving a rather large body count along the way (much to M\'s shagrin).  He encounters some new faces: Camille Montes (Olga Kurylenko) is Greene\'s girlfriend, who has a vendetta against a Bolivian general, MI6 Agent Strawberry Fields (Gemma Arterton) who works at the British Consulate in Bolivia, and Elvis (Anatole Taubman), Greene\'s second-in-command.

Quantum of Solace was directed by Marc Forster (Finding Neverland, The Kite Runner), and is a decent film. The action sequences are inventive and interesting, and there are more than a few passing nods to previous Bond films (including a great Goldfinger moment).  The biggest problem with the movie is that it\'s not clear what type of film it wants to be.  Bond spends most of the film vacillating between feeling down about Vesper\'s death, and the other half coldly killing people in some pretty decent action sequences.  It\'s a schizophrenic kind of film. Casino Royale allowed the filmmakers to reboot the Bond franchise and start from scratch, so technically the previous \"Bond formula\" shouldn\'t be applied to the new series.  Fair enough, but then we should hold the film up to how it functions as a sequel, and a revenge film.  It\'s not quite a Bond film, since it doesn\'t hold to the formula - there is very little spying, and it\'s more along the lines of a Jason Bourne film.  (In fact, one of my main complaints with the film is the involvement of 2nd Unit Director Dan Bradley, of the Bourne films. More on that later).  As a revenge film, it doesn\'t quite hold up, since he\'s never really out for revenge; he\'s just trying to find out what happened and understand his loss.  As a sequel, it\'s kinda wishywashy, in that it starts to ask more questions than it answers, and by the time the film ends, we\'re left feeling a little uncertain about why things when the way they did, since there are still plenty of loose ends that haven\'t been tied up.  The classic \"gunbarrel\" finally makes an appearance her at the end too, but feels tacked on.  I guess that\'s the problem with a \"Bond sequel\".... though they could have put it in the beginning.

The action sequences are well done, but sometimes they suffer from \"shaky-cam\" work, and the opening car chase looks like it would have been really neat to enjoy if I had a clue as to what the heck I was looking at half the time.  There are some good stunts, and some good shots, and the pros outweigh the cons.  Musically, the opening title sequence is probably the worst Bond song since Die Another Day.  Since The Living Daylights, the good Bond songs have been every-other-film (with the exception of David Arnold\'s \"Surrender\" from Tomorrow Never Dies), and \"Another Way to Die\" by Jack White and Alicia Keys is just dull, without much of a melody.  David Arnold\'s score works much better than the song, even in the few instances where he hints at it.  Vesper\'s Theme makes a nice return during Bond\'s more contemplative moments, and overall it\'s an enjoyable score - but we don\'t really get the full Bond theme until the end credits again.