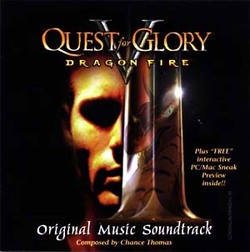 Erana, magic shops, and the Famous Adventurer\'s Correspondence School... gems of a beloved, old school series. If you were a serious PC gamer during the Modern Age of video games, you might have lost yourself (repeatedly) in Lori and Corey Cole’s classic collection, Quest for Glory (QfG), formerly known as Hero\'s Quest. Chockfull of legends, folklore, loopy wit, puns, characters, puzzles, in-jokes, Sierra On-Line references, heart, and multi-class fun, the series constituted the best merging of role-playing and adventure game genres. And for nearly a decade, the designs enthralled, the artwork titillated, and the music... it\'s something I still cherish to this day.

Each installment had its own unique style and atmosphere, but there was always a progression of change that kept things fresh on two fronts: visuals (starting from the days of EGA graphics and ending with a slightly less than par CGI) and audio (the evolution of MIDI samples to live orchestral recordings).

Back when graphics were rendered using dynamic, 64-color palettes, Mark Seibert\'s simple, poignant works helped bring to life the Euro-tailored, fairy tale highlights of QfG I: So You Want to be a Hero. His MIDI compositions resulted in a number of vibrant, attractive motifs, including the embedded-in-the-brain Hero\'s theme, and the attitude of the sly Remington Steele-flavored thief. In QfG II: Trial by Fire, Chris Brayman\'s collaboration with Seibert produced creative soundscapes (with occasionally amusing results, e.g., Used Saurus blats), and set the tone for the Mid-Eastern backdrop with ethnic twists on original themes, and a clever, whimsical score. Then came QfG III: Wages of War - the only game that was never planned; composer, Rudy Helm (along with the Coles) drifted from the uberfacetious, self-contained style of the previous games, and tackled more somber, serious subject matter. Improved MIDI samples appeared in grandiose, primal arrangements that narrated near every backdrop, character, and breathtaking, rotoscopic scene. The cartoonish, fanciful stylings of the past were almost entirely gone. This break was part of a thematic segue to the dark, brooding QfG (IV): Shadows of Darkness - which featured substantial, poignant, and improved MIDI creations by Aubrey Hodges. They were an awesome blend of gritty metal/rock, fused with traditional, orchestral arrangements that touched on folkish, Slavic tunes, classic horror film (perfect for the Lovecraftian elements), and took the QfG music to a whole new level of badass. Despite the million one bugs, Shadows had a score that blended seamlessly with stunning, hand-drawn graphics, unforgettable characters, top-notch voice acting, and a superbly crafted story; it would have made for the ultimate, climactic finale of the series had some rabid fans not caught wind of the end.

When an ad hoc coalition began pushing all of the right buttons, Sierra On-Line caved in to the demands and released QfG V: Dragon Fire in 1998. It was during a period of flux when the dev team tackled the project, so unforeseen production limits and hurdles resulted in a game that was a little... less than spectacular. Dragon Fire (originally intended to be the fourth of a thematic tetralogy) was a return to the tone and lighter style of the earlier games; it sported a Grecian look, less than stellar CGI (too rudimentary even for its time), labored voice acting, exasperating game mechanics and interface - it was more of an RPG than an adventure game - with an unintuitive, somewhat underdeveloped design, but maintained approximately the same writing standards as before. The most impressive element was the groundbreaking soundtrack by Chance Thomas (Sierra-Vivendi\'s The Lord of the Rings: War of the Ring, The Hobbit, and Peter Jackson\'s King Kong); it was the first time Sierra commissioned a full orchestral score for a game.

When I purchased the repackaged anthology (QfG Collection Series) for the demo and soundtrack ten years ago, I had never heard of the composer, or anything like what I sampled in the QfG V album - in a game. At that time, it was astonishing; no MIDI. And Thomas’s clean samples mixed with live performers added an immersive layer that was lacking in both graphics and gameplay. His Dragon Fire’s score is an original, near filmic work that uses (sparingly) the conspicuous Hero’s theme - just like the previous two games. (It appears exactly twice in this album; once as an audio reminder of the series origin, and again almost as the victory reward in "The Great Hall of Kings".)

Much like in QfG III and IV, the score for Dragon Fire also creates a unique atmosphere. But it’s much less distinctive, and a little confusing, due to a handful of diverse, multicultural styles, along with a return to simpler ideas for heroism - motifs that hail back to the works by Seibert and Brayman. "Frolic at Gnome Anne\'s Land Inn" is a buoyant polka piece that would better serve QfG I’s Central Europe setting, or even perhaps an amusing pocket in the Slavic-themed Shadows of Darkness. "Silmarian Meanderings: Day and Night", one of my favorite tracks, is a nuanced and elegant Spanish/Mediterranean arrangement consisting of live classical guitar, strings, harp, piano, winds, synths, drums, and percussion. "Greezy" (the new theme for thieves) and "No Sweat" are out of place, synthpop/rock cues featuring guitar-work vaguely similar to Hodges’ score, but exist purely for humor and bravado that\'s characteristic of the series. In "Ambient Tour", a collection of the looped ambient cues, more ethnic styles emerge, including blurred Arabic/Eastern instrumentation reminiscent of Trial by Fire, and light, tribal percussion for Wages of War tie-ins.

The simpler ideas are all too apparent in the majority of the tracks. Despite being beautifully rendered, complex arrangements, they aren\'t generic fantasy per se, but are too restrained, a tad harsh, and don\'t exactly stand out as evocative pieces. The past QfG composers were limited by technology (along with Hollywood-sized funds), and were thus, forced to focus on the core of composition - which is poignant melody first, and arrangements second. Dragon Fire\'s music production was a dream-come-true opportunity to rival giants of the film industry, but… even though technical standards were through the roof, the aesthetic end could have been better.

The first track in the album, "Quest for Glory V Overture", is like a sampler of the tracks to come; varied passages of the Rites et al are expressed in chunks and fluid phrases, and the overall impression is that the game will be more majestic than it is. (You have to wonder if the game\'s not-so-hot visuals - that are only pleasant from a distance - influenced composition...) Thomas\' battle or challenge tracks often seem like the melody is second to how it\'s presented by the Salt Lake City session orchestra or synths. It\'s temporarily engaging, but not particularly substantial (even as a game soundtrack). In "A Day in the Arena", and Rite cues such as "The Rite of Freedom", "Conquest", "Valor", and "Justice", the compositional approach has a processed feel even with the blend of live performances and heavy synths. It\'s formulaic and stilted at worst, and strangely enough, doesn\'t project intensity (except in volume) as well as its QfG, MIDI predecessors. Even in "The Rite of Valor", there\'s a touch of Helm\'s brash, borderline, whacked out Battle motif, but the results don\'t elicit much other than a feeling of sitting through something by Hans Zimmer (on an average day). The ultimate challenge for the final QfG game is the eponymous "Dragon Fire"; it fares slightly better in composition since it\'s somewhat more dynamic in melody, but still suffers somewhat from more interest in arrangement than melody.

In the original plan, QfG I: So You Want to be a Hero represented the spring season (earth), Trial by Fire was the summertime (fire), Shadows was ensconced in the fall (air), and Dragon Fire was winter (water). Of all the games, including Wages of War - which was an interesting blend of seasons and elements for an ad hoc, out-of-the-blue installment, Dragon Fire stands out as the only game that doesn\'t put its season to use. But the element of water makes some pieces shine, however brief they are…

"The Dance of Mystery and Intrigue", my favorite track of all, is flowing, sinuous, abstract, and sensual in weaving together the layers of instruments and vocals. It could almost encapsulate a lighter version of the undulating Oracle in Frank Miller\'s 300 - well, if the scene wasn\'t so plagued by darkness and foreboding. Another is "The Rite of Destiny", a haunting, otherworldly cue featuring smoother, calmer vocals and harp for a transient experience. It\'s entirely memorable as the only Rite that makes the best use of simplicity in arrangement, execution, and melody. "Undersea Exploring" - with a motif later heard in the warped soundscape entitled "The Rite for Peace" - is a minimalist track that features soothing synth, strings, piano, and guitar, and could be a companion piece to "Silmarian Meanderings". It\'s also the only time where arrangement - more than melody - works for the composition because (again) the sheer beauty of simplicity speaks for itself.

It\'s surprising that in ten years, my opinion of this soundtrack hasn\'t changed much. And while I do appreciate what it\'s done for the game music industry, the album needs to be judged on its own merits - away from the fame and acclaim. Chance Thomas has since improved with work on The Lord of the Rings and King Kong; so even with the myriad flaws, Quest for Glory V: Dragon Fire was an overall successful, positive move towards a better future for game music. Like all milestones, it has its own place and time.