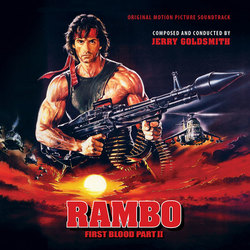 At long last, Jerry Goldsmith's Asian-tinged, action-packed score to Rambo: First Blood Part II joins First Blood and Rambo III in the Intrada catalog. Since it's initial release, collectors have clamored for a complete edition of the score—but that proved trickier than expected. When it was first expanded, not all source elements were available, and while nearly complete, the release was still missing some moments, as well as important pick ups and featured some unusual mixes that weren't quite right.

After poring through some 150 reels of 35mm magnetic film of the various audio elements (dialog, sound effects, outtakes, rejected audio mixes, radio spots, demos, etc.) Intrada located everything (save "The Map" and "Home Flight") from the first-generation three-channel scoring session mixes recorded by Mike Ross-Trevor at CBS Studios in London and subsequently remixed by Bruce Botnick at The Record Plant in Los Angeles. The sound was not as vibrant as the analog-to-digital elements Botnick had prepared (presented on CD 1) but it was still clean and free of major imperfections and because these elements presented a nominally different sound to the more familiar elements in existence, they appear on a CD 2. Also unearthed were the 24-track elements for the summer of 1984 teaser trailer. Although previously released on the First Blood album, that was sourced from 1/4" elements, and this new mix allows Intrada to present it in the best possible sound, along with an alternate version. The CD also includes Goldsmith's Carolco logo, which integrates the Rambo theme.

Appearing now for the first time is the brief but crucial "Pre Lift Off" that immediately precedes Rambo (Sylvester Stallone) taking off in his helicopter after having just defeated his nemesis, Russian Lt. Col. Podovsky (Steven Berkoff). Another tiny piece now included is the brief but powerful percussion outburst that plays at the end of "Stories," when the film cuts from Rambo to a shot of the American military base camp.

The grail to include in this expanded release was the mysterious original end title. As with the other two films in the series, Goldsmith's end title was replaced with a vocal, but in this case the end title was not included on any prior soundtrack album. Goldsmith had composed a brand new theme to meld with the theme. The result was a stunning piece that develops both of the melodies into a single rousing medley, unfolding over the familiar Rambo rhythms until everything climaxes with a powerful fortissimo coda. Alas, stereo masters were completely elusive, to the point where they may have been discarded or erased. However, a promotional cassette from 1985 still existed, and while not optimal, allowed Intrada to include this rare recording as a bonus on CD 2.

Intrada's decades long journey to present all three Rambo scores is complete, and for now the presentation of Rambo: First Blood Part II is about as definitive as it can get.