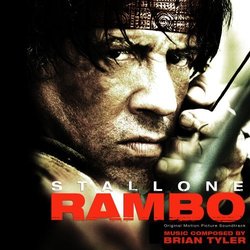 Brian Tyler\'s score for Rambo marks his third project based in part on a Jerry Goldsmith score. First was Timeline, following Goldsmith\'s unused score. More recently was Aliens vs. Predator: Requiem, in which Tyler hinted at the scores from the Alien and Predator franchises, including Goldsmith\'s Alien. While Tyler\'s scores are a bit heavier on the orchestrations, some of his brass work is reminiscent of Goldsmith, which is why he has probably been chosen for such projects. Rambo is even a step closer as he uses Goldsmith\'s theme throughout, along with his own that is based on the First Blood themes. Like the film, which takes place in present day Burma, Tyler made his score sound modern, adding his frenetic strings and ethnic solos (Hunted, Children of Dune) to Goldsmith\'s anthems.

"Rambo Theme" is a reorchestration and rerecording of Goldsmith\'s First Blood theme with acoustic guitar played behind a soaring trumpet solo. Tyler also introduces his theme for Rambo here with an ethnic flute solo. He also adds a descending motif to the underscore as part of his orchestrations. The themes are further fleshed out in "No Rules of Engagement", one of the four seven-minute cues on the album. While the film was short, the album is long and provides the complete score, albeit somewhat out of order. I actually enjoyed the film, for what it was, and was especially impressed that Tyler managed to get his themes heard over the din of the film even during the heaviest action sequences.

Tyler uses Goldsmith\'s themes periodically, but uses his own frequently, which is easily confused for Goldsmith\'s, given its influence. The main theme is used both in bold brass fanfares as well as subtlety, underscoring other motifs and rhythms with the melodic pattern, like under the heavy percussion in "The Rescue". As I mentioned before, Tyler is heavier with the orchestrations than Goldsmith, such as in the percussion in "The Rescue" as well as heavy guitar riffs in "Hunting Mercenaries". Contrarily, "Aftermath" contains one of the stronger statements of his theme in a sweeping, sorrowful cue, which is also used in "The Village"; this is his battle adagio version of the theme. Trumpet solos, such as in "The Call to War" particularly recall Goldsmith\'s work, such as The Last Castle. The biggest departure from the tone that Tyler used for this score is in "Attack on the Village", which uses the descending underscore motif I mentioned earlier, but in the forefront, which is highly reminiscent of Zimmer\'s "Journey to the Line". Tyler\'s main theme and a female vocalist can be heard behind it, but the change in tone is enough that it stands out on the album.

The album ends with three suites, "Battle Adagio", and the main and end title cues. Listening to these first may be best, as much of the thematic material is here rather than at the beginning. A female voice begins the adagio, similar to Children of Dune, before Tyler\'s sweeping theme comes in, backed by the descending motif. Goldsmith\'s theme is again reprised in the main and end titles, including his bolder brass motif in the latter. But again, this is reorchestrated by Tyler to have a present-day feel. Tyler\'s score for Rambo is two things: a good action score, and a faithful homage to Goldsmith\'s work on the first three films. He did not rely on Goldsmith\'s theme, though he used it enough to tie this film to the others, musically, and also based his own theme and orchestrations on the style of the original to maintain the musical series.