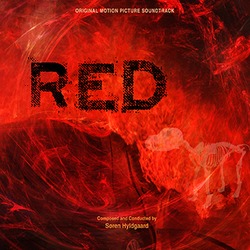 The world lost a wonderful person and hugely talented film composer on May 7, 2018. If it was not a name you knew, it was a name you should have known. But sometimes it's just the luck of the draw. Some film composers do great work without ever getting to the next level, and some do lesser work while climbing straight up the ladder. There's no predicting it – it's got a lot to do with luck and timing and lots of other things that seem to be at the whim of the great out there.

He began scoring films and TV in 1990 and his talent was immediately evident to those who heard his scores back then. He had a great gift for melody and even more importantly the gift of understanding how music should function in film. His first American film was Red, starring Brian Cox, which opens this CD. Red was a fairly low-budget film, a revenge thriller, and a very good one. The Los Angeles Times called the film, "An elegant and deceptively straightforward dramatic thriller." Hyldgaard's score is extremely evocative, mournful and quite beautiful, filled with the colors of rural America, and never overplaying its hand or overstaying its welcome.

The second score is to the powerful 2001 Danish documentary, Family. The filmmakers could not have chosen a better composer for their film. Once again, Hyldgaard turns in a beautiful score, with gorgeous themes, underscoring all the emotions of the film exquisitely.