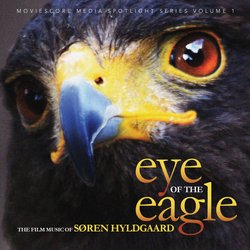 Eye of the Eagle: The Film Music of Soren Hyldgaard

Launching a new series focusing our attention on talented film composers who gets the opportunity to showcase their versatility and impressive output, MovieScore Media has the immense pleasure to announce this CD featuring music by Danish composer Sřren Hyldgaard as the first entry in our 'Spotlight Series.'

Hyldgaard emerged in the late 90s as a fresh voice in film music, writing many acclaimed orchestral scores for films such as Eye of the Eagle, Angel of the Night and Tommy and the Wildcat. This compilation features an impressive selection of suites and themes from 18 of Hyldgaard's projects. The album is virtually jampacked with thematic, exciting and beautiful orchestral music with an emphasis on the adventure genre, but also showcasing romance (The One and Only, Something in the Air), animation (Jester Till, Help I'm a Fish) and horror (Isle of Darkness, Angel of the Night). The album also features the theme from Hyldgaard's score for the Hollywood thriller Red as well as selections from his many scores for Danish film and television. Enjoy!

The first edition CD is limited to 500 copies.