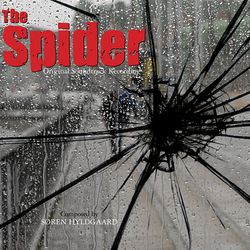 Beginning with the mesmerizing main title music, which draws you immediately into a musical spider's web, the score is so multilayered, varied and rich in its thematic material, it almost plays like a noir tone poem. Soren Hyldgaard is that rare thing in film music today, a composer who is not afraid of melody, and his melodies in The Spider are sublime and unforgettable. His music is part of the fabric of the series and propels us from episode to episode, tying together all the various plots and subplots. The music is beautifully played by the City of Prague Philharmonic Orchestra.

We are thrilled to bring his stunning score to The Spider to CD. There was an earlier CD release in Denmark, which quickly went out of print—that CD was about forty-four minutes duration. This CD runs close to seventy-nine minutes and is complete save for some repeated themes and cues. It's a major score with occasional echoes of bernard Herrmann, Jerry Goldsmith and John Barry, but somehow remaining its own unique musical landscape. This CD was mastered from the composer's complete score tapes.

This realease is limited to 1000 copies only.