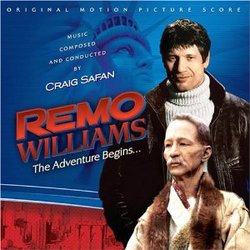 Craig Safan's recently released score for the 1985 film Remo Williams: The Adventure Begins is an engaging but fairly uneven album that attempts to marry traditional Western orchestral writing and authentic Korean instrumentation with jarringly modern synthesized music. Luckily, frequent renditions of the noteworthy themes for Remo and Chiun, the movie's two main characters, are what often manage to tie these contrasting musical styles together.

The first track, "Main Title", begins with a percussive rhythm performed by Korean instruments, which leads nicely into a soft string rendition of the theme for Chiun, an especially memorable pastoral melody. This passage is abruptly cut short by synth effects and a loud, brassy rendition of Remo's Fanfare, the heroic theme for, naturally, Remo. Interestingly, after the second orchestral statement of Remo's Fanfare, Safan includes what sounds like repeated sprays of gun bullets along with the music. Overall, this opening track provides a good introduction to the mixture of elements that will dominate the rest of the album: the two character themes, ambient and percussive synth, and traditional Western and Korean scoring.

As for how successfully Safan is able to juggle these varying styles and approaches as presented on album, it's a mixed bag. Some of the more minimalist and atmospheric synth does a good job of building suspense, such as in sections toward the ends of both "Rooftop Running" and "Remo Steals the Ambulance". But by and large, not enough is done for synth and orchestra to complement each other very well, which often results in harsh contrasts both in terms of approach and quality. Fast-paced drum machine beats or other looped percussive synth effects in tracks like "Knife" and "Rats" can often sound too rough around the edges, and are simply no match for the exciting brass and string rhythms that highlight "Military" and "Escape", or the innovative use of traditional Korean instruments scattered throughout various cues.

This leaves us with the thematic material, which is decidedly the most consistently successful element of the score. The respective themes for Remo and Chiun serve as effective counterpoints to each other; Chiun’s more developed theme has a heavier presence on the album. Bold renditions of Remy's Fanfare in "The Statue" and "Log Chase" elevate these tracks especially. Gentle, lyrical statements of Chiun's theme in "Remo Floats" and "Chiun and Remo", performed well by synth in the former cue and flute and strings in the latter cue, make these tracks among the best listens on the album by far. Perhaps the most memorable track, "Chiun Walks on Water/Remo's Big Ending" is a particularly exuberant cue that offers brassy and heroic renditions of both themes.

Basically, this album would've been stronger if it were shorter. Excising some of the less impressive synth work, which admittedly may very well function perfectly on film, would've resulted in a tighter album presentation more focused on the superior character themes and orchestral scoring. It's these last two elements that save the album from the abrasive synth material, and make the score an overall satisfying listen.