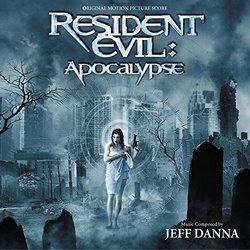 Marco Beltrami and Marilyn Manson provided a generally electronic score for Resident Evil, giving Jeff Danna the difficult task of writing a score for the sequel that had some sort of consistent sound in correlation with the first. Danna took a more orchestral approach, but was able to maintain the electronic feel for many parts of the music as well. Certain cues, "Searches for Alice" and "The Last Transport" are more heavily synthesized than other cues, though the pulsing electronic tone is present throughout the score. Danna has little in terms of a theme, but some instrumental motifs in the strings and brass keep the score together.

Resident Evil: Apocalypse is a powerful action score and there are few moments when the music is subdued or quiet. No one track stands out because the score is quite uniform in sound. The brass presence is strong, often in low pulses that support the electronic percussion. Drum programming and taiko were performed by Russ Miller, but the taiko is hardly audible behind the electronics. Missing from the album are many of the action cues that composer Elia Cmiral contributed. While this score is a much more enjoyable listen than Resident Evil, a franchise such as this one could have easily benefited from some more thematic development and a bit more variation in the sound of the music.