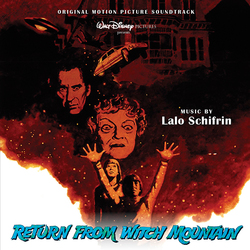 Intrada returns to the Disney vaults of the '70s with Lalo Schifrin's score to the 1978 live-action sequel, Return from Witch Mountain. The film follows the further adventures of Tony and Tia, now teens, some three years after their introduction in the original 1975 Escape to Witch Mountain. A long-time Disney fan, Schifrin was thrilled at the chance to compose the score for a Disney film. While Witch Mountain was lighter fare than his earlier scores, he didn't want it to be cartoon music. It was also his first foray into electronics, his first score that allowed him to plunge into mixing orchestra with electronics, including the ondes Martenot, an instrument championed by both Maurice Jarre and Elmer Bernstein. The score brought a musically adult edge to the studio, making the movie a little hipper and proving to Schifrin he could meld orchestra and electronics.

The film was released in mono and the score had never been mixed into stereo until Intrada mixed the 2″ 24-track session masters graciously provided by Disney Studios. This allowed Intrada to produce and master a brand-new two-track stereo mix, perhaps for the very first time, with stunningly vibrant and detailed audio. CD 1 is a presentation of the complete original score, heard in picture sequence. CD 2 is quite simply a bonus presentation of the strongest highlights of the much longer score, unfolding as a tighter listening experience. It is not intended as a replacement for the complete score but rather as an "album" that might have been offered in 1978 had one been released. It is intended for enjoyment when listeners might not have 73 minutes to play the longer program but still desire a satisfying listening experience under 50 minutes.

Return from Witch Mountain's tone was darker than the first film, as money-hungry adults use a mind control device to turn the now teenage siblings against each other. The formidable villains appear in the personages of longtime Dracula, Christopher Lee, and screen legend, Bette Davis. Davis was cast as Letha, the heiress enabler of Lee's mad scientist, Victor. Anthony James was cast as Letha's nephew-henchman, Sickle.