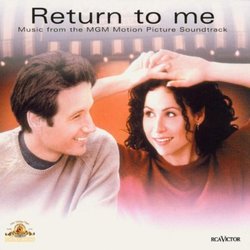 Review: Return To Me

by David A. Koran March 29, 2000
3.5 / 5 Stars
It is hard for me to actually consider writing a review of the soundtrack to the David Duchovny and Minnie Driver starrer Return To Me after a Sunday episode of X-Files. Knowing Duchovny's record for film successes (Kalifornia and Playing God ) versus his T.V. roles (X-Files and multiple appearances on The Larry Sanders Show), I'd automatically approach the film with some level of trepidation. Those starring Minnie Driver have fared significantly better, with such films as Circle Of Friends and Grosse Point Blank. The composer, Nicholas Pike, has progressed beyond his low budget movie and television status to getting an A-list picture to helm while competing with the 1950s source music. It's a challenging task for any composer, and Pike handles himself quite readily and ingenuously with the score cues presented on this album.

The majority of the album has a heavy dash of Dean Martin and Jackie Gleason vocals with contemporary reworking of the title tune ("Return To Me") and several period classics performed by Joey Gian. I believe that the approach of using old standards in films stereotypes the approach viewers will take when coming to view this typical romantic comedy. It's sets the tone of nostalgia a bit to far on the "way back machine" that will hinder a contemporary story or might help one that's trying to fit in a more formulaic mode. Besides taking a new approach on creating a tie and bond between the two leads, here done as a heart transplant story, it's nothing that When Harry Met Sally or a Sleepless In Seattle hasn't tried years previously. Last year's Playing By Heart was a much more intelligent film, both in it's story but also in the depth of character development, which made the score, masterfully done by John Barry, and the source music, a compilation of standards and some modern cues, much more relevant to the film.

I would have hoped, that with as many songs they have on the album, RCA could have also flipped for a little bit more than 10 minutes of score. As mentioned earlier, this is one of Mr. Pike's first big films, and a reasonably good effort, with a nice nondescript melody that ends much too soon for the average listener to get into the flow of the themes. Actor/Director Bonnie Hunt comments that the songs selected for the album remind her of the better times in her childhood, but it would be better if the music, at least as it appears here, played more of a relevant and supporting role. Unfortunately just another case of marketing directing the content of a soundtrack release, even if the entire thing chimes in just under forty minutes. With past RCA releases, it seems odd to have bucked their trend of lengthy well treated albums and simply slap together one to help market the film. If the previews have anything to say for whether or not to pass on the film, the soundtrack certainly helps steer my decision towards the latter.