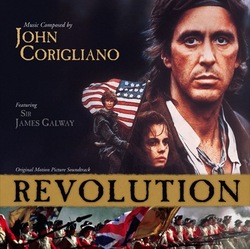 John Corigliano's very first film score, that for the film Altered States (1980), immediately established him as a hugely important film composer and earned him an Academy Award nomination. His third score, The Red Violin (1998) earned him a second Oscar nomination and, this time, went on to win! Corigliano's only other film score, 1985's Revolution, has never been released at all.

Sadly, the film's initial failure at the box office doomed it to a much more obscure existence... until now—in an elaborate edition of the album Corigliano had always wanted released, the composer has taken part in every step of production.

The American Revolution is more than the war of Washington and Jefferson, great issues and radical thought. It's also a struggle of ordinary people, unlettered in combat, politics and government. Al Pacino stars as a rough-hewn trapper drawn into the conflict in this compelling adventure framed by the violent summer of 1776 and the bloody victory of Yorktown in 1781. Revising the theatrical release specially for a recent DVD release, director Hugh Hudson (Chariots of Fire) finally realizes his own vision for the film and depicts America's birth in a visceral style unlike most period movies. The production design, cinematography, score and strong cast (Donald Sutherland, Nastassja Kinski and Joan Plowright) combine for an effect revolutionary and powerful.