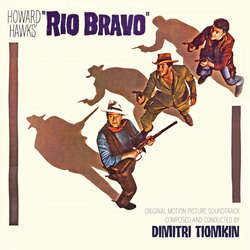 Composer Dimitri Tiomkin was no stranger to working with director Howard Hawks or the western genre. For Rio Bravo, Tiomkin outfitted the director's leisurely paced but dramatically concentrated western with a genre score that is notably restrained and subtle—an unusual approach for the composer. The result is a score that is an essential part of Rio Bravo's drama. In the opening sequence dialogue is notably absent, yet Tiomkin's score runs continuously, setting mood and reinforcing the on-screen dramatic tension.

Warner Bros. provided access to their entire scoring session elements, including the lengthy session masters stored on 2″ monaural tape. As the composer had scored a longer picture than what was finally released, Intrada discovered a number of additional cues not in the finished picture, as well as two versions of the trailer music and some fascinating alternates.

Closing the extras portion of this release of Rio Bravo are two studio recordings of the movie's main vocal themes, sung by Dean Martin, prepared for the Capitol label and released in 1959 on a 45 rpm record. All presented on this 2-CD set.