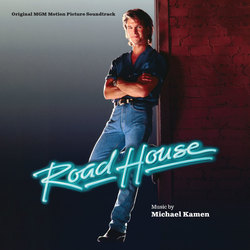 La-La Land Records, MGM and the Michael Kamen Estate proudly present the expanded and remastered re-issue of the original motion picture score to the big-screen '80s action classic Road House starring Patrick Swayze, Sam Elliott and Kelly Lynch, and directed by Rowdy Herrington. Legendary composer Michael Kamen closes out the 1980s with yet another dynamite action score, capping a thrilling decade's worth of classic action music—and suggesting still further exciting scores to come in the 1990s. Kamen's work was a perfect fit for the action films he scored – expertly supporting large-scale thrills and chills, but always finding the true drama in the film's narrative and the beating heart in its heroes – and Road House is no exception. This expanded and remastered re-issue, produced by Neil S. Bulk in collaboration with the Michael Kamen Estate and mastered by Doug Schwartz, from high resolution transfers of the recently located, complete set of original 3-Track stereo mixes, arrives in time for the film's 30th Anniversary and is limited to 2000 units. The exclusive and in-depth liner notes are by writer Jeff Bond, and the fist-flying art design is by Dan Goldwasser.

The last six tracks on this presentation (in the "additional music" portion) are sourced from the previous Intrada release, and we thank that label for their inclusion.