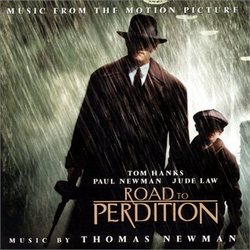 Road to Perdition, the highly anticipated sophomore effort from director Sam Mendes is a boldly dark drama that puts Tom Hanks in the unfamiliar role of hit man for the Irish mob.  The film is atmospheric and moving for the most part, but the soundtrack is ultimately too uneven to achieve the same level of success as the film overall.

This Depression-era drama shows Hanks' character's son slowly discovering the true nature of his father's grisly work.  When the son witnesses a murder by his father and another man, Hanks' cozy relationship with the local mob boss, played well by Paul Newman, is put on the rocks, because the other murderer was the boss' imbalanced son.  The boss' son proceeds to murder Hanks' wife and second son, and Hanks and oldest son must run for their lives.  The film effectively shows the almost warm appearance of the mob family life, then turns it on its head when the "family" comes after an innocent boy and his father.  The characters are clear cut and well-developed, including the menacing hit man who trails the two, played by Jude Law.  The film's main problem comes in that the pacing and tone is uneven.  Mendes starts it as a tense, moody piece, making it stand out from its other Hollywood brethren, but then the tone shifts to more straight Hollywood when Hanks and son try to bond and get warm and fuzzy.  Also, despite the fact the film starts off at a slow, measured pace, the film suddenly takes on a more rapid, functional pacing later on that seems rushed.

Though for different reasons, the soundtrack is similarly uneven.  There are some good choices by composer Thomas Newman.  Rich, ambient pieces set the mood of the film.  Then, he switches moody, more traditional Hollywood score, which still works, because it helps create a rich and intimidating world.   The score is at its best in one of the final scenes in which Hanks seeks revenge; the music is ethereal yet still emotional and effective.  (It is also reminiscent of some moments in American Beauty.)

Where the soundtrack is flawed is that it has too many different other genres as well.  It goes very Hollywood with light, perky score for scenes between the father and son.  Newman throws in hints of Irish music as well as some period overtones, which work okay, but never seem truly integrated into the overall work.  Also, the composer brings in exotic instruments to add a sense of unease, which could work, but given how rooted in one culture, Irish-American, the film is, it seems incongruous and off-putting.  One should not fault Newman for mixing things up and having some variety, but the lack of coherence in the score does lessen its impact.    There are individually affecting pieces, but the overall work is too much of a smorgasbord.

In conclusion, though Newman gives us a broad range of music in this film, he does not tie it together, and the soundtrack seems uneven and directionless.  If you are a big fan of the film, this soundtrack is worth it.  Otherwise, it is probably a pass.