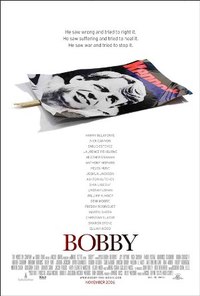 When Robert F. Kennedy was assassinated, it was a pretty devastating blow for the country. He was seen as a shining beacon of hope for a nation that was being torn apart over racial segregation, Vietnam, and other things. It was, after all, the Sixties! In Bobby, director/writer/actor Emilio Estevez takes us to the Ambassador Hotel in Los Angeles, on the fateful day during the primaries when Kennedy was shot.

We follow a variety of groups of fictional characters over the course of the day: the Ambassador Hotel doorman (Anthony Hopkins) who plays chess with his retired friend (Harry Belafonte), a young woman (Lindsay Lohan) marrying a friend (Elijah Wood) to help him avoid getting sent to Vietnam, an alcoholic entertainer (Demi Moore) and her business manager husband (Emilio Estevez), the hotel manager (William H. Macy), his hairdresser wife (Sharon Stone) and his mistress who works at the hotel switchboard (Heather Graham), married socialites and Kennedy campaign donors (Helen Hunt and Martin Sheen), Kennedy campaign volunteers (Brian Geraghty and Shia LeBeouf) who put off campaigning and instead try to win the affections of a waitress (Mary Elizabeth Winstead), and end up hanging with a drug dealer (Ashton Kutcher), a Czech reporter (Svetlana Metkina) who is dealing with another Kennedy aid (Joshua Jackson) to get an interview with Kennedy, the hotel\'s Food and Beverage Manager (Christian Slater) who is dealing with racial tensions between himself, his chef (Laurence Fishburn) and his busboys (Freddie Rodriguez and Jacob Vargas). Whew. Yes, it\'s a lot of people, and a lot of Hollywood heavy-hitters too.

The problem with Bobby is that there\'s too much going on. Yes, it\'s interesting to see how all the characters interact and co-mingle with each other, and it all leads up to the big celebration that is tragically cut short when Kennedy is shot as he leaves through the kitchen, but there is just too much here to really get attached to. Estevez makes liberal use of audio from some of Kennedy\'s speeches, to remind us of the problems that they faced in the 1960s, and how some of them might still be a problem today, but by injecting all these well-known faces into the crowd, it\'s almost a game of \"spot the cameo\". It would have been easier if they just focused on a few characters. Also, the historical manipulation to change the other victims of the shooting to be some of the characters we\'ve been following seems slightly contrived.

Bobby was a competently made film, but it just didn\'t do anything for me. I can\'t say you should take the time to see if it does anything for you, but hey, it\'s a free country!