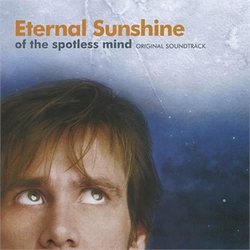 Eternal Sunshine of the Spotless Mind

Jon Brion is one of those composers that I just trust. I have a very small, mental list of composers that I trust enough to go out and buy one of their scores based solely on the fact that one of them wrote the music. Needless to say that when I heard that Job Brion was doing the score for Eternal Sunshine of the Spotless Mind, I was ecstatic. Brion is the only composer I know of who can go from the drama drenched melancholy of Magnolia, to the silly fancy of Punch-Drunk Love, and make it seem like it's no big deal.

Enter Eternal Sunshine of the Spotless Mind, a film that chronicles the hazards of mixing memory erasure with troubling relationships. The movie tells the story of Joel and Clementine, two people who couldn't be more different if they tried. They like each other though... at first. Things soon get a little rocky, and Clementine impulsively decides to end the relationship by having all memory of Joel erased. Joel accidentally finds this out, and hastily decides to have the procedure done as well, erasing Clementine from his memory. In the middle of the procedure, however, he decides that he wants to hold onto the memories. So, like any logical human being would do, he steals the memory of Clementine away into memories where she doesn't belong, i.e. childhood memories, teenage memories, etc. It's love Charlie Kaufman-style all right, and it provides a great opportunity for all involved to shine, including Jon Brion.

The score is an extremely memorable one, in the movie and on the album. Brion has a wonderful ability with catchy tunes and melody, which is beautifully featured throughout. "Theme" and "Main Title" are perfect examples of this, not to mention the ever-hip song "Strings That Tie To You" sung by Brion himself. The score teeters on the edge of the dramatic, the comedic, the thoughtful, and the downright silly, which is a feat that Brion knows all too well how to pull off. The score does have its weird, repetitive moments, a la "A Dream Upon Waking" and "Drive In," but these are still very fun to listen to. "Peer Pressure" and "Elephant Parade" are beautifully thoughtful cues. The only strange thing about some of the cues is their length. Some last for only fourteen to thirty seconds, which is fine, but odd. In other words, it fits perfectly for this score. Most scores have the short cues combined with longer ones, but this album seems to be all about embracing the oddity, which is refreshing.

Another wonderfully refreshing aspect about the album is the fact that they chose to put ELO's "Mr. Blue Sky" on it, despite the fact that it isn't even in the film, but is used heavily in the trailers and television ads for the movie. I know of very few other soundtrack albums that feature the music used in the trailer! The other songs on the album are very complimentary to the score, and fit quite nicely in the scheme of the soundtrack. However, it's the score that really steals the show.

Steeped in the odd, silly and weird, while maintaining elements of a romantic comedy, Eternal Sunshine of the Spotless Mind is just plain fun. The images and story are all top notch, and I can't think of anyone else equal to the task of scoring this film than the great Jon Brion. You can really tell that he had a lot of fun with this, as it's a lot of fun to listen to. Summed up, it's a delightfully odd score for a delightfully odd movie.