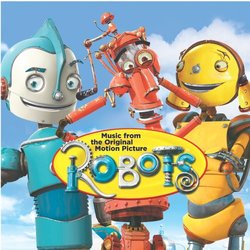 You know there's some formula for soundtrack albums that executives apply mathematically. They just get the requisite pieces to assemble a prep-fabricated album. What does most of this have to do with the actual movie? Little to none - just another thing to sell under a certain corporate branding. That being said, the song album release of Robots is better than originally feared, due to the inclusion of some great songs.

Not that there is any deviation from the formula. There's tracks from up and comer artists ("Walkie Talkie Man" by Steriogram) and established stars (the groovin' "Wonderful Night"; the best track from Fatboy Slim's Palookaville album). Of course there are several vintage songs pulled out of the library. Here we have stuff from Earth, Wind & Fire ("Love's Dance"), War ("Low Rider"), and James Brown (remixed in "Get Up Offa That Thing."). Let's not forget some rap ("Right Thurr" by Chingy, and "I Like That" with Chingy again, teaming up with Houston, Nat Dogg and others ). Oh and you always have to end with a highlight track from the score ("Robot City", a new track not on the score release). This lively piece has Blue Man Group accompanying John Powell's fun score. It reminds me of the funk/-action fusion of Powell's underrated Advenutres of Pluto Nash score. And yes, that will be the only time I will say "underrated" and "Pluto Nash" together.

This all equals a better than average soundtrack album, thought nothing exceptional or unique.