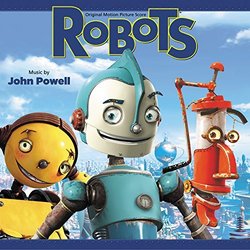 Robots is a perfect glimpse into John Powell's career. Combining the playfulness of Rat Race, the action of Evolution, the percussive elements of Drumline ("Rivet Town Parade") and the Bourne films, and the inventiveness of Chicken Run, among others. Even the opening cue, "Robots Overture", presents a multitude of the styles this single album contains. The main theme is very similar to his themes from Just Visiting and Face/Off and it is used throughout the score. Powell also employs the percussion of the Blue Man Group to add to the mechanical qualities of the score, as the eccentric trio probably did not only bang on drums. However, their contribution is like any other percussionist's; the majority of the score is orchestral with a little electronics and the Blue Man Group's drumming to supplement that.

"Train Station" is a sweeping cue for the orchestra that gives the listener a break from the big band, bouncing cues before it, at least for a portion of the track. We get a great action cue along the lines of Paycheck in "Wild Ride", an accordion solo in "Madame Gasket", and a bit of a percussive waltz in "Meet the Rusties". For Robots, Powell created a playful score that is, in a word, fun.

Beginning with "Gathering Forces", the score picks up the pace - if that's possible - and becomes an action score. The playfulness and quirky instrumentation is still there, but in a more dramatic clip. "Escape" is an high-octane action cue for fans of Chicken Run. "Attack of the Sweepers" slows a bit and introduces a brief bagpipe solo. However, "Butt Whoopin'" is the high point of the score with a full orchestral swell followed by a rocking electric guitar and then back to the orchestral finale. The album closes with two sweeping orchestral cues.

On the downside, Powell's musical ideas tend to have very short lives and he only builds up some of them. For example, there is a great choir crescendo in "Crosstown Express" and a bold brass statement in "Gathering Forces" that make the listener want more, but it quickly dies. This is probably due to the limitations of the film, but comes across as disappointing on album. Nevertheless, the score is a great listen if one does not listen to hard for any great thematic or instrumentational development. What it really does is show bits of each of Powell's past projects and makes one look forward to where he will go next.