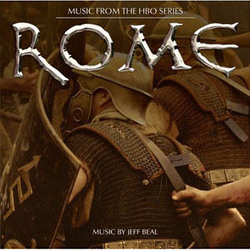 Jeff Beal\'s Emmy-nominated score for "Rome" is a unique, intricate, and creative soundscape for the HBO series about the time of the Caesars. I do have to start by saying that I am a bit puzzled by the choice of instrumentation, at least for the main theme. It brings to mind a setting in Northern Africa - say Carthage or Egypt - rather than the European setting of Rome and Gaul, where Caesar fought his more famous battles. The function and goal of this score is different from Hans Zimmer\'s Gladiator: it is less focused on the tragic heroism and more on the multiple settings and characters of the show. While the second season has reached the shores of Egypt, I do wonder at Beal\'s choice of his ethnic instrumentation for his musical representation of Rome. The important point, however, is that it does work. Quite well.

In the nature of an epic, yet chronologically-oriented, television series, Beal\'s score has similarities to Bear McCreary\'s "Battlestar Galactica". While McCreary utilizes any number of ethnic tricks to represent the entire human race, Beal takes a more focused approach to mainly the Mediterranean region. The framework of the score utilizes a unique combination of light percussion and ethnic and vocal solos. Like "Battlestar Galactica", there is an intended infrequent use of brass instruments except at key moments, here to mainly color military scenes or characters. The major correlation is a wide number of themes that are specific to characters in the show ("Niobe\'s Theme", "The Battle Has Begun (Caesar\'s Theme)", "Octavian and Octavia\'s Themes"). This is also common in other television show scores, such as Sean Callery\'s "24". Unfortunately, such a large cast limits the appearance of specific themes on the album to one, maybe two, so thematic development can be hard to hear. One exception to this is Caesar\'s theme. "The Battle Has Begun" introduces it in a quiet woodwind, building with triumphant trumpets sounding a victory for Caesar (I believe in Gaul). This theme returns in "The Murder of Julius Caesar" with a primarily woodwind solo, but bringing in the trumpets at the end.

The main title introduces the ethnic instruments and light percussion that permeates the entire score and the main theme is reprised in a more playful version in "The Forum". "Riot in the Senate" introduces a more tense style of music as well as a different element: dialogue from the show. I usually do not like this (More Music from Gladiator, Hannibal), but the snippets are very short and do not detract from the score, as I felt they did in Hannibal. This cue also contains one of the few uses of horns in the score toward the end of the cue. The highly percussive style of the main title returns in "Janus Breaks" and brings to mind the feel of a marketplace, like what Zimmer did for Marrakesh in Gladiator. I like how Beal mixes plucked guitars with the drum beats to add to the percussive nature.

A more melodic moment with the orchestra comes in "Vorenus Made Evocati, Servilia\'s Curse", but these are few. A classic example of Beal\'s score is in "Death of Pompey", which includes all the ethnic and percussive elements, but also adds a pulsating orchestral section to the backbeat to supplement one of the more significant events. The first true "Egyptian" influence comes in "Cleopatra Seduces Caesar", but there is little to make this sound more ethnic than the rest of the score. A bit of female vocals and a statement of the main theme are added in, but toning down the ethnic uses in the score would have made this cue stand out more. The album ends quietly with "Niobe\'s Fate", in contract to the energetic main title and leaving the series open for the second (and final) season. Fans of the show will be happy to get their hands on this score, but this soundtrack will appeal to many fans of ethnic scoring.