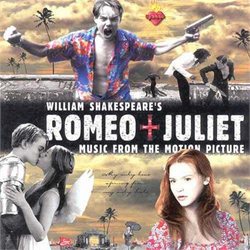 I find it amusing that several of the bands on the Romeo + Juliet soundtrack were completelyunknown to me at the time. In fact, when I saw the film, I didn't really noticethe music in it, with the exception of the gospel-inspired cover of "WhenDoves Cry" in one of the church scenes.

Five years after I first saw Romeo +Juliet, I realized how great the soundtrack is. The combination ofbands and singers isn't something I think anyone would expect to see. Garbageand The Cardigans? Umm, no. Des'ree and Radiohead? Certainly not!  It works, though. The film itself is full ofseeming incompatibilities: guns and Shakespeare? Baz Luhrmann's vision of Romeo + Juliet, set in modern settings,could have been disastrous.  Who's goingto believe that corporate tycoons carry around swords and daggers (you know,the kind with blades) in their limousines? No one, exactly. (Unless thosetycoons are huge Final Fantasy fansor something, but that's a whole other beast.) So the attention to detail onseemingly small things like the guns (having names like "longsword"and "daggers") turned out to be a powerful decision.

The soundtrack, too, must have had a great deal of attention paid toit. All of the artists aren't from the same label, nor are all of the songs thesame kind of sound. They vary wildly and yet each of them speaks to someimportant aspect of the film; whether in title or lyric. "Young Hearts RunFree" - come on, literally and figuratively, that's what this whole movieis about. Well, that and miscommunication. (Personally, I was kind of hoping tosee "Communication Breakdown" on here, but that's probably just mymorbid sense of humor talking.)

"Lovefool" - I really shouldn't have to explain that one; itapplies to the film and just the play itself. Near the end of the soundtrack,there's a song called "To You I Bestow". One of the lines at the headof the song, "Kiss me, kiss me until I'm dead" seems like a creepything to say, especially contrasted against the somewhat quirky, upbeat tone ofthe song. Really, though, that's just what happens in Romeo + Juliet, doesn't it?

"Talk Show Host" - without delving into the mind of ThomYorke, the title of this track smacks of the bookend beginning and ending ofthe film with the news report style recitation of the "tale of Juliet andher Romeo". The feel of "Talk Show Host", edgy and weird butoddly infectious, reflects the film beautifully. Both sport an angst-ful,experimental vibe that might not be immediately understood, but cannot be dismissedeasily, if at all.

Overall, this soundtrack is a wonderful compliment to the film butcould stand on its own two feet and is a great purchase even for someone whodidn't care for the film. I liked the movie, so the soundtrack is just an extragrab bag of fun stuff for me.  Speakingof fun stuff, this soundtrack (which is actually the first of two that werereleased for the movie) has one of the best CDExtra presentations I've everseen. Period. You can shuffle through stills from the film, listen to theentire soundtrack and read accompanying scenes, as well. Plus, it just lookspretty.