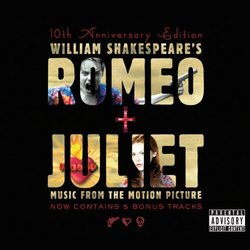 Baz Luhrmann\'s gaudy glittery genius is that he loves all music and almost all genres. And he loves them with GUSTO. He has no shame about what music goes where and next to what. Coinciding with a new DVD release of Romeo + Juliet (The Music Edition) is this new Anniversary release of the original soundtrack album - and it reminds a bit more why we need another movie from him, stat!

This 10th Anniversary Edition has five new tracks. Or one sorta new track and four new to this album. Four of the "new" tracks are the film versions of scenes, combining the song with Craig Armstrong\'s score and film dialogue (for once, this is a good thing) that are pulled directly from the excellent Romeo + Juliet Volume 2 release. The brilliance of the movie\'s music is the masterful work of Craig Armstrong weaving the material together, combining pop tracks and Wagnerian music (which he would do even better in Moulin Rouge). "Introduction to Romeo" combines the bass riff of Radiohead\'s "Talk Show Host" with intimate string underscore. "Young Hearts Run Free (Ballroom Version)" is the supercharged version of Kym Mazelle\'s disco pastiche, only now with Paul Sorvino\'s drunken Italian singing. And the most missed track from the original release is included, Quindon Tarver\'s boy choir version of "When Doves Cry". As for the final new track, it is a slightly remixed version of Baz Luhrmann\'s 1999 hit, "Everybody\'s Free (To Wear Sunscreen)". The song is sung by Quindon Tarver, which pulled from the original "Everybody\'s Free." The slight update is the intro now says "Class of 2007".

What about the original release? Unlike the soundtracks of say Trainspotting or The Saint, this album is defined by the period rather than defining the period. It has all of the prerequisites of the age (So-Cal Rock, Alt Rock, moody Goth Rock, Pixie Rock) but it combines a surprising amount of contemporary soul ("Angel", "Kissing You"). Many of the tracks hold up strong (Little Star", "Pretty Piece of Flesh"). Several huge hits came about of this album (Garbage\'s sexy "#1 Crush" and the light infectious "Lovefool"). Shirley Manson\'s vocals on "Crush" still has a hypnotically pull, and tracks by Butthole Surfers "Whatever (I Had a Dream)" or Radiohead should never be ignored.

It is a fluffy album and a very good fluffy album that\'s a bit better with the additional tracks. But this gets us into the expected new release/old release dance. If you really have the other two albums, will you buy a new release for one not really new track? It leaves the album teetering uncertainly on that scale of impulse buy. On the personal end, I grumble (and I always grumble) about tracks that none of the albums have had, like Radiohead\'s closing credits piece, "Exit Music (For a Film)." That would be the inclusion that would push it over for me.