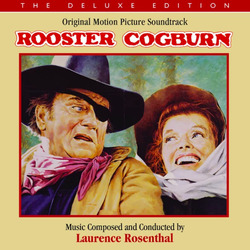 The 1975 film Rooster Cogburn featured the return of John Wayne's booze-swilling, eye-patch-sporting, rough-and-tumble U.S. Marshal that was first introduced in the 1969 western True Grit. The score was composed by the Oscar-nominated composer Laurence Rosenthal, who also scored the 1964 drama, Becket. Much of the Rooster Cogburn: The Deluxe Edition score was inspired by either Stephen Foster or Aaron Copland. Look no further than the main title to find a Copland-esque, proud cowboy lullaby that sings over open, orchestral plains or trotting guitar chords as the need arises. This is the first time any music from the film has ever been released.