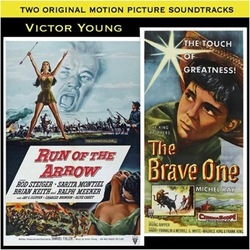 Run of the Arrow / The Brave One

One can only imagine what heights could have been reached by so prolific and gifted a composer as Victor Young (1900-1956), if he hadn't died prematurely just as the Cinema was undertaking a new technical boom to face the challenge of television. This classically trained violinist, author of numerous popular songs, knew how to make the most of a symphonic orchestra for the big screen.

A pioneer in this field since the silent era, composer of over 300 movie scores, Victor Young wouldn't have the opportunity to work on numerous milestone Hollywood productions. Among his best known scores, we can mention For Whom the Bell Tolls with Gary Cooper and Ingrid Bergman, Cecil B. DeMille's Samson and Delilah, John Ford's Rio Grande and The Quiet Man, George Stevens' classic western Shane, as well as the comedy adventure Around the World in 80 Days, which brought him—posthumously—his only Academy Award.

Although less known, the music from Run of the Arrow and The Brave One, gathered here, appear to be as impressive. They rank among the very last scores written by the composer. Still, we had to wait decades to see the first one finally released on CD, and the latter reissued with the benefits of improvements in digital technology.

If the rather modest but honest Run of the Arrow by Samuel Fuller can still entertain the audience in these days, it is largely thanks to the inspired and energetic music by Victor Young. As for the equally sweeping score for The Brave One, performed by the 110-piece Munich Symphony Orchestra, it echoes the masterpieces of the international classical repertoire.

As presented on the LP albums released at the time, these original soundtracks have the merit of not beating to death their main theme and offer a large instrumental palette. This balanced approach alternates between orchestral outbursts and periods of quiet respite, which are sometimes tinged with sentimentalism. In both cases, the music is more evocative than descriptive, resulting in a very satisfying, uninterrupted listening experience. 12-page full color booklet.