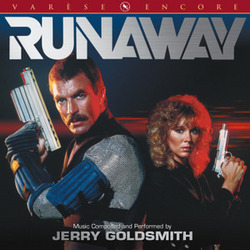 Runaway was one of only three all electronic scores by Goldsmith. Of the three, however, Runaway was the most "symphonic." The layers and textures which Goldsmith incorporated into the score, (which he performed himself), contained all the hallmarks of his compositional style. Runaway is very much a score orchestrated for synthesizers.