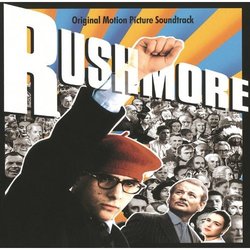 by David A. Koran January 27, 2000
5 / 5 Stars
As a reviewer, you feel bad when you let a real great soundtrack slip by on your schedule of reviews. Luckily we have the home video market to redeem ourselves on. Thankfully it allows me to review one of my favorite films of the past year and the great music that accompanied it. Wes Anderson and Owen Wilson, the two close friends who brought us the hilarious Bottle Rocket, follow up with an even better sophomore effort with Jason Schwartzman and Bill Murray in Rushmore.

I would have to say that this film embodies a rather unique brand of storytelling about the strange love triangle that forms between Harry Blume (Murray) Max Fischer (Schwartzman) and newcomer Olivia Williams as Miss Cross. I really can’t describe why I really like it, it’s just one of those films that everything kind of fits together perfectly, no matter how odd the situations are in the film. It has everything a good romantic comedy should have, love, betrayal, revenge, and for the happy ending, something original. Of course, it really can’t be considered a romantic comedy by conventional methods either. It fits as a coming of age film with Max Fischer coming to terms with his pre-pubescent lust for a first grade teacher while battling for her attention with the older Mr. Blume. It’s a truly strange combination by any means.

For a strange film, you need an equally fitting strange score and musical accompaniment. This is aptly provided by former Devo frontman, Mark Mothersbaugh, who as a film composer has a strange resume to suit, including The Rugrats Movie and The New Age. When there isn’t the score we get treated to the best use of pop music in a film in the past ten years, with tracks coming from such luminaries as The Who, Zoot Sims, The Kinks, John Lennon, and Cat Stevens. The score and the songs add another bizarre level to the drama and humor throughout the film, and even an inside joke upon listening to the full versions of some songs.

I would recommend anyone to pick this album up just for the experience, and upon the recent release of it to video, I recommend seeing the film again… for the first time. I would hope that Mark stays with his talents displayed on this film and I’m also looking forward to the next Anderson/Wilson collaboration which I’m sure is in the works.