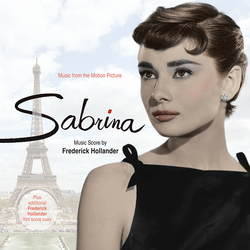 Billy Wilder wanted to use popular tunes throughout Sabrina, and Frederick Hollander was the perfect choice to do those adaptations, as well as provide a few original themes. The resulting score was a memorable and charming pastiche—in fact, it's impossible to think of Sabrina without hearing Hollander's incredible arrangements of such standards as "My Ideal," "I Don't Want to Walk Without You," "Lover," "Dream Girl," "Isn't It Romantic?" and more. No one did this kind of score better than Hollander and Sabrina is pure unadulterated movie scoring magic.

Two years later, Paramount released a wonderful Christmas comedy called We're No Angels, starring Humphrey Bogart, Peter Ustinov and Aldo Ray as the titular angels. Once again, Hollander provides an incredibly appealing score, which has both original and memorable themes along with interpolations such as "Silent Night."

Frederick Hollander had a really long and fruitful tenure at Paramount, and to fill out this CD, we present surviving cues from several of his film scores for the studio, including The Bride Wore Boots, The Affairs of Susan, The Great McGinty, Remember the Night and Disputed Passage. It is a pleasure to bring an entire album of Hollander music to CD. Though he is perhaps unsung these days, we hope that this potpourri of delightful music will show what an amazing talent he was.