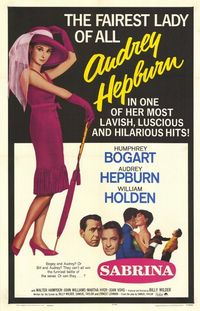 Billy Wilder\'s 1954\'s romantic comedy Sabrina tells the story of Sabrina Fairchild (Audrey Hepburn), the daughter of a chauffeur to the wealthy Long Island family, the Larrabees. For her whole life, Sabrina has been in love with David Larrabee (William Holden), the younger of the two Larrabee sons - but David is a womanizing playboy who has never taken notice of Sabrina.  Miserable with her life, Sabrina leaves for Paris to become a chef, and eventually returns to New York as a much more mature and sophisticated woman - and now David finds himself drawn to her (after not recognizing her at first).  David\'s older brother Linus (Humphrey Bogart), sensing that David\'s impending marriage might be in danger, tries to draw Sabrina\'s attention towards himself.  The risk is, of course, that he himself might end up falling for Sabrina.

Based on the Broadway play Sabrina Fair, Wilder\'s comedy was nominated for five Academy Awards, including best Director and Best Actress.  It won for Best Costume Design, and the elegance presented in the film helped define Hepburn\'s dual role as an actress and a fashion icon (one that ultimately was solidified with Breakfast at Tiffany\'s).  The film was recently released on DVD as part of Paramount Pictures\' 100th Anniversary celebration, in a new 2-disc "Centennial Collection" edition.

The image quality for the film is quite good.  It\'s a very clean image, and the black-and-white contrast is solid and detail is nicely represented.  The audio is presented in Dolby Digital mono, and sounds just fine for a film of the era.  Dialogue is rendered clearly, and the music by composer Frederick Hollander sounds nice, even in mono.

All of the special features are presented on the second disc.  Starting with the appropriately themed "Audrey Hepburn: Fashion Icon" (17.5-minutes), we dive head-deep into the world that Hepburn helped define, with the help of designer Hubert de Givenchy.  Fashion designers Eduardo Lucero and Trina Tirk also show off new designs that they say were inspired by Hepburn\'s various film roles.  "Sabrina\'s World" (11-minutes) looks at the wealthy area of Long Island where the film takes place, showcasing the rather large estates.  "Supporting Sabrina" (16.5-minutes) looks at the unsung heroes of the film, the supporting cast, and how these character actors have actually contributed a lot more to the film industry than you might realize.  "William Holden: The Paramount Years" (30-minutes) is a companion piece to the Hepburn bio-featurette on Roman Holiday; it\'s a solid (albeit slightly narrow) biography on Holden\'s life and career, with an obvious emphasis on his time as a contract actor at Paramount Pictures.

The seemingly mistitled "Audrey Hepburn: In Her Own Words" (12-minutes) is actually a bit of a "Making-of Sabrina" featurette, with a focus on Hepburn.  "Behind the Gates: Cameras" is the next installment in the Centennial Collection featurette series (Sunset Boulevard looked at The Lot; Roman Holiday looked at Costumes).  This time we look at the rather impressive stock of cameras that are at the studio, and how technology has evolved over the past 100 years.  "Paramount in the \'50s" (9.5-minutes) is a look at the rather impressive array of films that the studio released in that pivotal decade when television started to erode at the audience base.  Finally, the theatrical trailer is presented, as well as four photo galleries ("Production", "The Movie", "Publicity", "The Premiere").

Sabrina is a light romantic comedy that helped set the stage for Hepburn\'s emergence as a fashion icon.  It\'s not one of the best films of the era, but I couldn\'t help but feel that the way the comedic bits played out served, in a sense, as a prelude to what Wilder would end up doing with his comedic masterpiece, Some Like it Hot a few years later.   With a solid transfer and satisfying array of extras, Sabrina is well worth picking up if you\'re a fan of the film.