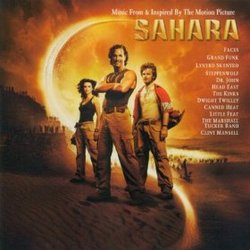 After the box office bomb Raise the Titanic sank in 1980, author Clive Cussler said he would never let anyone make a feature film with his beloved "Dirk Pitt" character again. Obviously things changed, because now we have Sahara. And while some things have been significantly changed from the novel, the basic premise remains the same: explorer Dirk Pitt (Matthew McConaughey) is on the hunt for a Confederate Ironsides which he believes is in Africa, having escaped during the end of the Civil War. Meanwhile a WHO doctor (Penelope Cruz) is trying to find the source of a plague in the same area of Africa. Their paths cross, and an adventure begins in the Sahara Desert.

The soundtrack is replete with pop songs - most of them even showed up in the film. From "Stay With Me" by The Faces, to standards like "Sweet Home Alabama" and "Magic Carpet Ride", the songs don't really serve the film except to provide filler music. There was even a point where a sequence that was ripe for an orchestral score cue was instead covered with Dr. John's "Right Place Wrong Time". That isn't to say that there was no score - in fact, Clint Mansell's score was quite good, in a big orchestral James Bond kind of way. Unfortunately, the album doesn't even give us a taste of that, instead providing us with the African percussion (and vocal) filled "Boat Montage".

As this is a "Music from and Inspired By" album, there are a few "bonus" track which have nothing to do with the film other than "thematic tone". "In a Foreign Land" by The Kings (because they're in Africa), "On the Road Again" by Canned Heat (because it's a traveling song), "Time Loves a Hero" by Little Feat (because Dirk Pitt is a hero). Not really sure why "Fire on the Mountain" by The Marshall Tucker Band and "I'm On Fire" by Dwight Twilley are here - but they have the word "fire" in there, so that must be something!