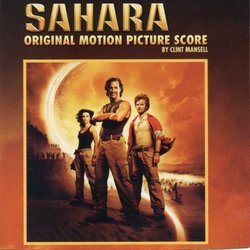 To be quite honest, I was not expecting to like this film or this score. As an underwater archaeologist, I have been a Clive Cussler fan since I was young, and as such, I felt they casted the film wrong and figured they would destroy the idea. Cussler\'s ocean explorer, Dirk Pitt, is one of modern fiction\'s most popular heroes and any film made of his stories need to be done with a similar mix of adventure, humor, and history that make up Cussler\'s books. I didn\'t think Sahara would cut it. I ended up being mistaken. The only music of Mansell\'s that I knew was Requiem for a Dream and the single episode of CSI: NY that he scored, so was highly skeptical about his action/adventure abilities. Again, I was mistaken and must say that Mansell produced an excellent score for Sahara that nicely establishes the character of Dirk Pitt.

The album opens with "Ironclad", a bombastic action cue from the Civil War prologue. The rest of the music is an interesting combination of ethnic music and percussion ("Here We Go" and "Mosque") and adventurous action music that follows Pitt (Matthew McConaughey) through the Sahara desert as he searches for the source of a toxin and a Civil War warship. Mansell\'s overall sound is similar to some of Jerry Goldsmith\'s action music, and parts appropriately sound like his work for Congo.

The album begins slowly, containing most of the ethnic sounds, but picks up with the boat chase cues, which introduces the brassy, heroic theme for Dirk Pitt. Bits of this theme are apparent in the prologue cue, which introduces the history behind Pitt\'s quest for the Civil War Ironclad, but first comes to life in "Hold Tight!" This was the one criteria I had for this score: no matter how good it was, it had to have a theme for Pitt and it had to be a good theme. It does, and it is. Mansell uses this theme regularly throughout the action music and gives the sound a bit of a James Bond feel with some muted brass blasts. Overall, the theme is always performed mightily by the brass section and is the type of heroic theme that, like the scenes it accompanies, makes the audience grin.

We get a taste of Mansell\'s ambient Requiem for a Dream sound in "Eva Investigates" and "Bonding" but the action is far from over. Beginning with " Burn Tower", we have nearly 15-minutes of pure action music with a heavy use of Pitt\'s theme, and makes a great listen. The album ends with "Rock On (Ironclad Remix)", a rock version of the main themes from the film, which has its moments, but is ultimately skippable.

I would be shocked if this production team made a second Cussler book into a film, given the controversies over Sahara, but I felt the film was faithful enough to his story to warrant another try. I would also love to hear Mansell develop his theme further as Pitt moves to a different location. But whether or not that happens, this album is a journey you should take.