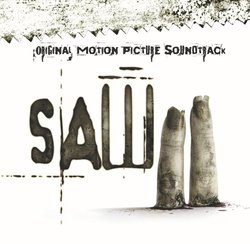 The soundtrack album for Saw last year was a mix of five hard rock and metal songs and nine score cues by Charlie Clouser. For Saw II, there are 14 rock songs and one score suite by Clouser. The original setup worked well to combine the songs, which fit the general tone, with Clouser\'s score.

This sequel compilation gets some bigger names in the music industry (Papa Roach, Marilyn Manson, Sevendust), but pushes aside the music from the film. The tone of the album again fits that of the film and Clouser\'s music, but they are generally unrelated to the film in any other sense. Clouser\'s contributions are cut down to the mix track of "Irresponsible Hate Anthem (Venus Head Trap Mix)" by Marilyn Manson and his score cue, "Don\'t Forget the Rules", which reprises his Zepp theme from the latter cues of Saw.

The album features some exclusive songs, including Mudvayne\'s "Forget to Remember" and will be enjoyable for fans of this style of rock, but does not work as well as the first album as a soundtrack representative of the film.