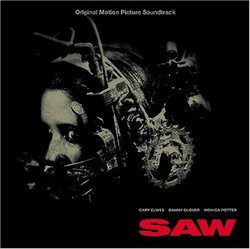 The whole point of a film like Saw is to catch the viewer by surprise. Composer Charlie Clouser and the producers of this soundtrack took that to heart. The first half of the album is Clouser's dark electronic cues intermixed with a few rock and metal songs, which follow a similar style. The songs are not great, but they do maintain the harsh soundscape of the score, and some were, in fact, used in the film. One of Clouser's cues, "Reverse Beartrap", starts with an explosive, fast-tempo electric guitar and synth cue that accompanies a time-lapse sequence of one of the murders in the film. The music keeps pace well with the editing of the scene as a clock ticks down.

The last four tracks of the soundtrack are where the score diverges from the hard-rock sound and, by the end of the album, actually becomes partially orchestral. The music continues to follow the events in the film, with "We're Out of Time" and "Fuck This Shit" picking up speed and urgency. Then the volume of sound drops in the final 30 seconds of "Fuck This Shit" as chilling male and female vocals take over from the electronics. The final two tracks contain the theme from the film, which is played intensely by the strings and repeated over and over as the finale plays out on screen. This was the point in the film when the music was most noticeable, as it dramatically increased the sense of urgency and fear. Clouser's score is quite appropriate for the film, if not necessarily easy to listen to, but progresses along well with the film to the final performance with the theme.