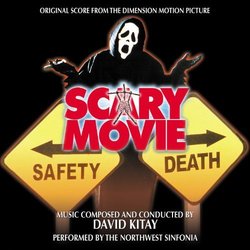 For all of the money it made at the box office, Scary Movie not only wasn't very funny, it wasn't very clever either. It's unfortunate that "satire" and "parody" has been reduced to making incredibly lewd joke and recreating scenes from other movies. "Ooh! That's The Matrix! Oh - that's from Scream!" Instead of being funny, it's just watching recreations of shots from other films, tied together with a loose storyline. Yes, I laughed at Scary Movie, I laughed a lot - but not because it was funny - because it was gross, and dumb. Composer David Kitay's score to the film did a perfect job accomplishing what it set out to do: provide a generic horror score while at the same time poking fun at other films scores in the genre.

The most obvious score to get poked at, of course, is Marco Beltrami's score to Scream. As evident in the first track, "Bye Bye Carmen", the tense minimalism followed by the pulse pounding orchestra and screaming horns are of the same cloth as Beltrami's work. A theme pops into play in "Last Summer", but doesn't last too long. "The Shower Shrunk It" and "Bobby The Suspect" (among other cues) simply use the orchestra for effect, and it doesn't really provide much beyond that in the way of themes or drama. But then, would you really be expecting that from this film?

"Ooh, I'm Scared" makes good use of the piano, and a pulsing bassline. True drama rears its head in "The Jumper", and a tender moment (once again making fun of Beltrami's female vocalizations in Scream) with guitar in "Cindy's Ready". "Titanistad" sounds, obviously enough, like a Horner knockoff - but only for a short 30-seconds. "All That Gizz" is a rockin' jazz piece that underscores, well, read the title - and if you've seen the film, you know what it goes with. The climax in the film, "I'm A New Man" continues with the Beltrami-esque score, but once The Matrix is parodied, there's a brief moment where the score knocks off "Spybreak", by The Propellorheads. It's amusing in the film, especially once it breaks into a "Riverdance" number.

"Doofus" plays for a moment on John Ottman's score to The Usual Suspects, as the ending is a knock-off of that film, too. The cue (and thus the score) ends without a satisfying musical climax - and with a running time of only 26-minutes, I feel like there should have been something more to wrap it up. However, the chances are very good that this is all the score there really is in the film - so I ask if the chronological sequencing of the tracks was the best approach, given that it doesn't end satisfactorily? This release is available exclusively through Super Collector (http://www.supercollector.com/) and given the material, I think you're probably better off getting the Scream trilogy score albums instead, if you want to hear what this score is only trying to imitate.