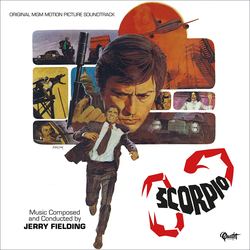 Celebrating the Jerry Fielding centenary, Quartet Records, in collaboration with MGM, is proud to present the first commercial LP edition of Scorpio, one of the most celebrated collaborations between the composer and Michael Winner.

This CIA thriller starring Burt Lancaster, Alain Delon and Paul Scofield, gave Fielding, a key composer in American 70s cinema, the opportunity to create a haunting Parisian melody, which he then surrounds with his trademark complex motifs, aggressive rhythms, and electrifying action cues, all done in his unique voice and avant-garde style.

Jerry Fielding prepared an LP for United Artists Records in 1973, but it was ultimately aborted. It was finally released in 1978 within the Elmer Bernstein Film Music Collection in a limited print run, omitting any images from the film. For this edition, we had access to the original, mint-condition album master in beautiful stereo.

This limited 500 units edition, pressed on audiophile 180 GM transparent red vinyl, has been restored and specially mastered for vinyl by Chris Malone.