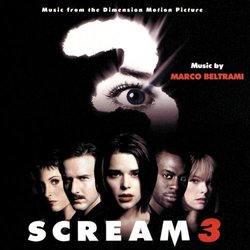 In an interview in 1997, Marco Beltrami said that his ultimate musical goal, career-wise, was to develop and refine a style of music that would be truly American and truly modern. His mind-boggingly innovative scores to the Scream trilogy and del Toro's film Mimic are certainly a good place to start this Americanization of contemporary European music. Beltrami's trademark "synth-orchestronic" style emerged from those movies, stabbing the listener multiple times with an array of ever-changing electronic samples and shrieking strings. Some people dismiss his horror music as so much noise, while others pick up on the order behind the chaos, the careful techniques drawn from the avant-garde, and the beauty with which all of these elements come together to form a cohesive whole.

The film, Scream 3, might have been the weakest of the trilogy, ignoring the cleverness of the first movie and resorting to the very clichés it made fun of, but Beltrami's score is certainly stronger here, more "put together". He has said that his goal was to expand on the themes he crafted in the first two movies and to achieve an even better balance between the electronic sounds and the orchestra. Right from the start, Beltrami establishes that balance with a cluster of urban rhythms, dissonant woodwinds, and low brass ("Here We Go Again"). The rest of the score is comprised of cues which fall mostly into three categories: orchestra-driven chase sequences ("Cotton Gets Picked", "Ghost Attacks"), contempo urban set pieces ("Dewey Mobile", "Sunset Pictures"), and softer ambient segments to accompany dialogue ("Comparing Photos", "At the Station").

The score is not filled to the brim with themes but, in between the feral screeches and industrial clangs, Beltrami does expand on the thematic material we've come to love. "Sidney's Lament" is given four beautiful renditions, showing Sid's more vulnerable side and accompanying her dealing with her past. The closure she gets at the end of the movie is scored in a heavenly fashion, with the choir no longer lamenting her past but embracing her future. Ghostface's theme is reprised here as well, a theme Beltrami himself described as a "chromatic descending line over a triadic with linear base movement that's separated by a lot of space". And that Hans Zimmer theme from Broken Arrow does come back in "Sid Wears a Dress", quirkily underscoring the final Dewey and Gale scene.

There are a lot of creative sounds in this score, most of them samples that Beltrami made by recording orchestral instruments played in extreme conditions or modified both acoustically and electronically. A lot of the percussive atmosphere is achieved with a wide range of processed piano sounds, recorded by having all kinds of small objects stuck inside a piano and sampling various velocities. Beltrami, his orchestrators (seven people as well as himself), and John Kurlander mixed these samples in with the orchestra in order to achieve that perfect balance between the two. The result is a score in a league of its own that represents the culmination of three movies worth of ideas. It's aggressive, it's hip and, best of all, it might just be truly American.