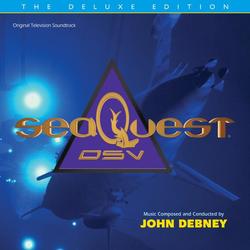 seaQuest DSV: The Deluxe Edition, was composed and conducted by Emmy winning composer, John Debney. The original (1995) 14 track album has been expanded to 58 tracks and two CDs. The album was remastered by Chas Ferry from the original sources provided by the composer. Disc one features music from the show's pilot episode, while Disc two features music from selected episodes from Season One curated by John Debney. The deluxe set features eight pages of extensive liner notes from film music journalist Tim Greiving and from the show's creator Rockne S. O'Bannon.