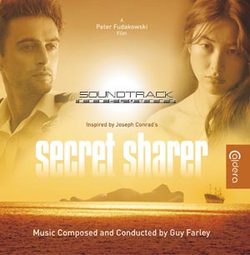 Caldera Records is proud to present the most recent score of British composer Guy Farley in an exclusive deluxe-package: Secret Sharer, based on the short-story by Joseph Conrad, was directed by Oscar-winning producer Peter Fudakowski, who describes a tender romance between a captain and an Asian refugee on a cargo ship, accompanied by Farley's tender score which makes use of a Polish traditional and a strong, romantic main theme, bearing resemblance to the idioms of John Barry. The music was recorded at Abbey Road Studios in London.

Additionally, the CD features selected cues from Farley's unused score for the production of Tsotsi, directed by Gavin Hood, which has never been heard on CD before. While Secret Sharer is a traditional western-sounding score, Tsotsi makes use of African percussion, soprano, kora, marimba and orchestral strings, being even more tender than the main project presented on this disc.

As a bonus, we included an insightful audio-commentary by Guy Farley, talking about his work on Secret Sharer. The first CD-release of Caldera Records features a detailed booklet-text by Gergely Hubai and elegant artwork by Luis Miguel Rojas. The CD was produced by Stephan Eicke and John Elborg.