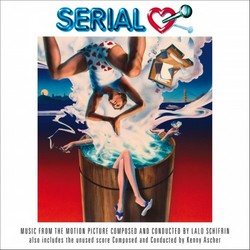 Quartet Records and Paramount Pictures are proud to present a 2-CD set with the world premiere release of infectious catchy score composed and conducted by legendary Argentinian-born composer Lalo Schifrin, including the also catchy unused score composed by Kenny Ascher.

Lalo Schifrin provided a stunning melodic score, dominated by the song "A Changing World," with lyrics by Norman Gimbel and performed by Michael Johnson. This tune is the key theme of a score in which you can find disco seventies music, hippie sitar sounds, jazz waltzes, frantic orchestral chases or a beautiful love theme. A hidden gem in the filmography of the composer!

Curiously, the Schifrin score was not the first choice for the film. Kenny Ascher composed and recorded first a score that was rejected. Ascher's music is charming and melodic. It is written in essentially the same style as Schifrin's—in fact, both scores are perfectly interchangeable.

The album has been remixed and mastered from the well-preserved 24-channel multi-tracks, courtesy of Paramount Pictures. The package includes liner notes by Tim Greiving, who discusses the film and both scores.