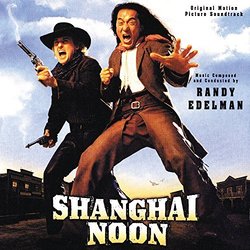 by David A. Koran July 19, 2000
3.5 / 5 Stars
Upon seeing the first posters for this film on bus stops around L.A., I had a suspicious feeling that this was going to be an interesting movie. I have to admit that unlike most folks my age, I’m not exactly a fan of Jackie Chan, even after seeing a number of his films. His costar in this one, Owen Wilson, however, I have grown to become a fan of, who starred in such films as Bottle Rocket, and one of my personal favorites, Rushmore, which he also co-wrote with director Wes Anderson. Although he didn’t have as much influence in this with the writing, his comic timing and sensibility, along with Jackie Chan’s (last seen in a similar role with Chris Tucker in Rush Hour) make the film extremely funny and enjoyable. If you’re a fan of the western and it’s associated spoofs (like Blazing Saddles and The Frisco Kid), this film will prove to be a real cavalcade of fun. It’ll make your head dizzy how many references (lovingly irreverent) to other westerns and even out-of-genre films. It is, by far, the best, but most underrated, comedy of the summer of 2000. If you haven’t seen it, catch it while you can, if you’ve seen it, see again or you’ll be "jones-ing" until the DVD release.

The composer picked for the film, Randy Edelman, has had intimate experiences with the oriental musical elements used in the film, but is less familiar with the western and Americana. He’s honed his skills in the first arena with such films as Dragon: The Bruce Lee Story and Welcome To Paradise with solid, and oft quoted, cues that usually have him employed whenever a director is looking for that type of feel. As for a taste of the American West, Edelman hasn’t had a nod to do such a score, but he’s been able to pull a rather satisfying one off for Shanghai Noon. What makes this score most effective is the seamless blending and interchangeability of the instrumentation and melodies between the two musical styles. The starting few tracks parallel the first few minutes of the movie which set-up the reason for Jackie Chan’s arrival in the American West. The initial tracks transition perfectly via the appropriately named "From East To West", which introduces the main theme that makes a few appearances throughout the score. Since the dialogue in the film is delivered with such droll perfection, it’s not necessary to sell any of the jokes with the music like most comedies nowadays. In turn, Edelman is allowed to write a convincingly straightforward score, complementing the occasional poignant moments but shining by supporting the action sequences perfectly.

This film sets a precedence for the modern western, and hopefully this begins a renaissance for that genre that has been trying to jumpstart over the past decade. This rare 60-minute issue from Varese Sarabande is pretty chunky at 28 tracks, covering most of what appeared in the movie. The score is as engrossing as the film, and is definitely one of the "best of" selections for anyone trying to get to know Randy Edelman. This is the type of score that if The Wild Wild West was a better film, could have easily fit had Elmer Bernstein been unavailable. So, for a first time outing for a western score, Edelman bellies up to the bar and raises it a couple notches.