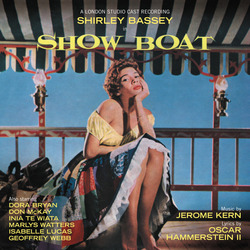 by April 16, 2013
0 / 5 Stars
This is a studio recording of the 1927 musical Show Boat by Jerome Kern and Oscar Hammerstein II. Show Boat is probably one of the most famous musical shows of all-time and is widely regarded as the first truly great American musical.

The album features a stellar cast that was formed especially for this recording, and features the debut recordings made by Shirley Bassey. Here she performs two songs in the role of Julie LaVerne.

The score is rich with a half-dozen memorable songs, including "Make Believe," "Can't Help Lovin' Dat Man," "You Are Love," "Life Upon the Wicked Stage," "Bill," and the stunning "Ol' Man River."