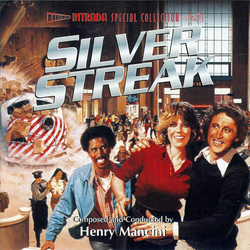 Silver Streak, director Arthur Hiller's homage to Hitchcock, teamed up comic funny-men Gene Wilder and Richard Pryor in a comedy filled with intrigue, action, suspense, and a memorable train crash at the end.  George Caldwell (Wilder) has a romantic encounter with Hilly Burns (Jill Clayburgh), an art historian's assistant.  When the historian goes missing (Caldwell sees him dead but no one believes him at first), he is soon tossed from the train as he starts to stick his nose where it shouldn't be.  Now he has to catch up to the train, solve the mystery of the professor's death, rescue Hilly, and stop the villain from carrying out his evil plans.  Underscoring all of this is the jazzy score by Henry Mancini, now finally released on Intrada Records as part of their special collection

The "Main Title" starts out with a repeated motif, which sounds intentionally just like a locomotive rhythm.  The strings perform the main theme, a lyrical sweeping melody that carries the listener through the opening titles.  As one would expect from a 1970s Henry Mancini score, the music is more or less littered with smooth jazzy moments.  "Something for Jill", and "Scenic Route" are upbeat and fun, but the more serious and romantic "Hilly's Theme" is definitely one of the highlights of the album.  The main theme pops up a bit through the score, notably in "Lie Down George", "This is Terrific", "The Fun of Flying", "Son of This is Terrific", and others.

Mancini also provides dramatic tension and action where necessary.  From the tense action of "Gold Teeth", the dangerous suspense in "Pure Pussy" and of course the exciting climax of the film in "Runaway Train", Mancini doesn't limit himself to one style.  Speaking of styles, he also provides source cues in the film.  From the 1950s doo-wop "Club Car Rock", to the dopey harmonica sound in "Redneck Blues", and finally to the 70s funk sound in "Men's Room Rock" and "Shoe Shine".  While some of the source cues sound dated (notably the funk), the one thing that really seems to date the score would probably be the use of the occasional synth strings - but that is just a limit of the technology available!

The score runs a little under 48-minutes, and is presented in highly satisfying mono.  But that's not all! For this special release, Intrada went a step further and put over 30-minutes of stereo mixes of various tracks (depending on what was available).  This is ultimately better to listen to, but it's not complete.  Kudos to Intrada for not "shuffling them up" and giving us a stereo album with a few mono tracks shoved in the middle.  All said and done, this is a full album, running a tad under 80-minutes long.  Toss in some informative liner notes, and this is a solid release of a highly-requested Henry Mancini score that no collector should be without.