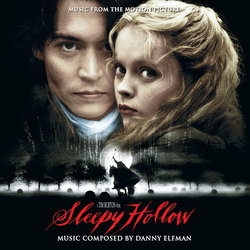 Intrada brings a taste of Halloween to the world a few months early with this new, 4-CD set of Danny Elfman's dark, serious work for Tim Burton's 1999 adaptation of Washington Irving's Sleepy Hollow. Sleepy Hollow was familiar territory for Elfman: gothic, mythical, creepy, action-packed and romantic. The score features a prominent main theme for the horseman himself. Or is it for Ichabod Crane? Perhaps it's a theme that unifies Crane's childhood and the headless horesman. While the melody is as lyrical as anything Eflman has ever written, it resonates very differently in its various guises throughout the score, whether sung by a boy's choir or by the orchestra playing powerfully over a blasting pipe organ. It's a score that churns and moves in dark powerful currents, a storm of danger and dread.

The score in the film runs 95 minutes, from which Hollywood Records culled 68 minutes for its original album presentation. With the support of both Hollywood Records and Paramount Pictures, Intrada presents a 4-CD set of the score, including some rare finds. The first disc presents the original Hollywood Records program. Discs 2–3 cover the complete score as heard in the film, with the fourth disc featuring over 66 minutes of original and alternate versions, often markedly different from the versions ultimately used in the film.

In Burton's version of the story, Johnny Depp stars as Ichabod Crane, a New York City homicide detective in 1799, working at the threshold of scientific advances and advocating the use of new forensics technology in a world full of skeptics. Crane is sent to Sleepy Hollow, just up the Hudson River, to solve a string of mysterious beheadings. There he finds a town full of silence and secrets, the heart of which is the Van Tassel family. Crane untangles a complex web of family history and conspiracy involving a dead pregnant widow, a rewritten will, and a possessed Tree of the Dead. Around every turn is the ghost of a Hessian soldier, riding through town and lopping off heads. In digging up the town's violent past, Crane ends up exhuming his own—a childhood traumatized by the murder of his witchcraft-practicing mother by his hyper-religious father.