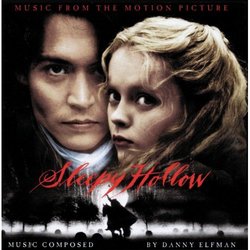 For many, Sleepy Hollow is a return not only for filmmaker Tim Burton to the darker fantasy worlds of Beetlejuice and Batman, but also for composer Danny Elfman (not to mention the return of the well known "The Final Confrontation" track title!). After a stretch of the later part of this decade, Danny Elfman has explored with great critical success deeper facets of his stylistic voice. This sort of artistic exploration yielded some complex and bitterly difficult scores like Dead Presidents and A Simple Plan - with great cost to his "fanbase". While many film score fans deserted Elfman in his self-exploration, those who stuck to listening to his output were rewarded with scores that focused more on tone and atmosphere rather than out right themes and melody. With Sleepy Hollow, both those who crave the thematic and richly orchestral Elfman of Batman, Darkman and Edward Scissorhands and those who enjoy his "mature" works like A Simple Plan and Dolores Claiborne will not be disappointed. Sleepy Hollow is quite possibly Danny Elfman's best genre score since Batman and perhaps the best score album release this year.

Things start out with the darkly sinister "Introduction", which sets the tone of things to come. We're treated to a wide spectrum of sounds: organ, male chorus, children's choir, percussion, chimes, solo voices, and plenty of towering brass. Casual listeners who haven't seen the film will note that this isn't a comedy and that out-right terror rules this score. The "Main Titles" accompany Ichabod Crane's trip to the town of Sleepy Hollow and it's here that Elfman's music begins to work it's magic with the film's visuals. Trembling strings and glowering brass echoes make way to a romantic statement of the main theme, followed by a chorus of voices that segue into a wall of blasting brass (consequently 2:00 into the track Danny Elfman's name appears onscreen hitting perfectly with the orchestral upheaval). The track concludes with a soft choral statement.

"Young Ichabod" is the first of the flash back sequence cues on the album that are interpolated throughout. It's comprised mainly of piano, solo children's voices with soft chorus. It matches the playful, magical yet thinly veiled malevolence as Ichabod remembers his times with his mother. "Sweet Dreams" and "More Dreams" also accompany these flashbacks and are more of the same. They serve as nice counterpoint to the hellishly bombastic cues that are sandwiched between them. "The Story" is one of my favorite cues. As Michael Gambon (Baltus Van Tassell) recounts the story of the Headless Horseman, the music builds from a pinched wimper of strings and plaintive horns into a solo woodwind statement and choir. The tension begins to build into what becomes the first appearance of the Horseman brass/choral signature that is sure to rock your stereo. The motif again appears somewhat varied in "Masbeth's Terrible Death", this time in action mode.

As the score is comprised of three parts: the young Ichabod sequences, the headless horseman cues, and the love themes, evidenced nicely in "A Gift" and given full bloom in "Bad Dream/Tender Moment" and "Love Lost". Elfman's romantic material goes straight for the heart and is one of his most beautiful melodies in recent time.

Other notable moments include "Into The Woods/The Witch", which is wonderfully Elfman-esque. You'd think you were transported back a decade! A moment played on demonic violins has been accurately described by my friend Shaun Rutherford as "The Evil Sommersby". "The Tree of Death" is a mammoth nine-minute plus cue that features some brisk action writing, proving that Danny Elfman hasn't lost a step since taking on decidedly un-action oriented material. The last cues "The Church Battle", "The Windmill" and "The Chase" (which begins with some breathtaking strings!) and "The Final Confrontation" all feature complex, exciting action music that transcends the usual approach so often used in scoring today. Elfman's music never falls into a "been-there-done-that" mentality, instead it's fresh - though sharp ears may hear a lick or two from The Frighteners.

The album concludes with a lush orchestral finale in Elfman's traditional mode: lots of brass and choir. It's both uplifting and invigorating and proves that no one composer can cap off a film and score better than Danny Elfman. A nice suite of themes and variations comprise the "End Credits", featuring a new take on the Horseman motif with some electronic percussion.

Hollywood Records should be applauded for releasing what seems like the entire score. As time goes by I'm sure smaller cues will be spotted that weren't included on the album, but as it stands now, there is not one piece of music I heard in the film that isn't on the album. It's superbly paced, and provides a satisfying listen from the beginning to the end (it's rare that a score doesn't require programming out some tracks while listening - even the excellent scores). For those who have become disenchanted with Danny Elfman for the last few years, Sleepy Hollow is definitely the score that will remind you why you enjoyed his music in the first place. It works amazingly well in Tim Burton's brilliant film, and just as well on disc. Isn't it great how I've managed so far to avoid mentioning the old cliche..."You'll lose your head over it"?