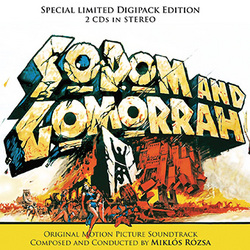 Digitmovies is truly proud to present—after having produced numerous CDs dedicated to great Italian musicians—the first reissue in digipack format of the CD dedicated to the important international musician Miklós Rózsa releasing in a double CD BOX deluxe edition of the full stereo original motion picture score from the 1962 movie Sodom and Gomorrah directed by Robert Aldrich (and Sergio Leone as second unit director). This double-disc set also celebrates the 52nd anniversary of the movie and its musical score.

In the case of Sodom and Gomorrah he had performed deep research into Yemeni and Babylonian Jewish music so as to create the dances and prayer songs for choir in their original language. Thence the orchestral themes of pure fantasy are combined with motifs that have antique origins.