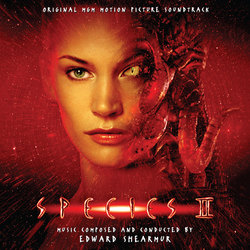 Intrada's latest release from the MGM catalog features Edward Shearmur's 1998 score to Species II, the sequel to the successfull 1995 film Species. Species II represented a leap for Shearmur, as his career began just a few years earlier. This genre sequel brought him his largest project to date. Director Peter Medak and Sheamur agreed not to follow the musical language set by composer Christopher Young in the first film and take a more traditional approach. Featuring large orchestra and layers of electronics, Shearmur delivered a rousingly scary and sensual score. In what seems a rare occurence these days, the well-spotted film features the finished score as originally intended by the composer with little to no deviation. For the composer, the score was a step towards even bigger projects, including the stunning music for Sky Captain and the World of Tomorrow and The Count of Monte Cristo. And for the rest of the world, a new sci-fi horror score arrived to thrill.

The original release on TVT Records featured less than half of Shearmur's score, clocking in at 30 minutes, whereas this release features over 70 minutes. Robert Fernandez created a crisp and vibrant mix of the original sessions, now featured in its entirety on this new Intrada album.

In the film, astronaut Patrick Ross (Justin Lazard) returns from Mars a hero, but also infected with alien DNA. Back on Earth, he works his irresistible glamor into a host of instantly newborn sons, all waiting to metamorphosize into world-destroying aliens. Earth's only salvation is Sil, now reborn as "Eve," once again played by Natasha Henstridge, but now in a more sympathetic, if no less dangerously reprised, form to help save the world.